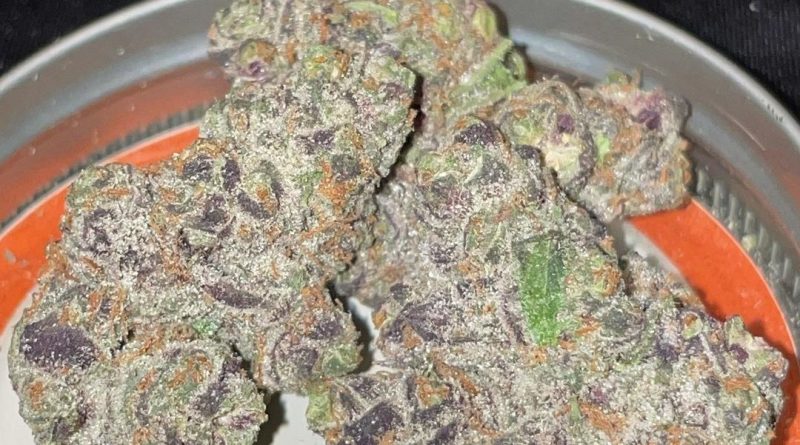 Hey what’s up everyone? It’s the weekend and time to unwind! I’m going on a small expedition up north today but wanted to share a review with you that I had sitting in the chamber for the last couple weeks. The Apple Fritter that I will be going over today is another cultivar that was gifted to me by Dankdabs in which the cultivator of this requested to remain anonymous. I believe this is the 3rd or 4th time I am reviewing an Apple Fritter cultivar and believe that this cut can stand with the best of them. Let’s waste no more time and get into the facts!

When I was gifted with this Apple Fritter, I received it in a small-but-wide Ball Mason jar with a metal twist off lid. Nothing too fancy about the packaging on this one. Upon twisting off the lid, I received a sweet, cinnamon-like smell that reminded me a bit of a baked good. In addition to this savory smell that the Apple Fritter exhibited, I also experienced a bit of a piney must to go along with it. This was pretty on par with most fritter strains I have come across, however, I would say that cinnamon smell was a lot more pungent on this one than those I have reviewed in the past. When I proceeded to take the nugs out of the jar I was met with fat buds with impressive colas. Despite being leafy in certain spots, the buds were, for the most part, dense with a bit of crisp to them. Just holding one left a bunch of scattered kief particles on the fingertips. Personally, I felt that the aesthetics were on point with this one except for the dried up, dark purple spots on certain areas.

Similar to the smokability of the Apple Fritter, the medicinal effects were what you would expect from this cultivar. I felt a cerebral buzz take over which encompassed into a full on head high. To add to that feeling, a huge burst of energy from the effects which was complimented by increased productivity. As of late, I have really been leaning towards Apple Fritter as my go to day strain and that was personified by the effects this cultivar created. I did notice myself rambling a bit when under the influence of this but this typically was done in a goal-oriented way. The duration of effects lasted well over and hour an half with a seamless transition during the come down. The effects, however, were far from daunting and I did have the urge to light up again after smoking this. Like I said this cultivar didn’t blow me away as much as it served as a flavorful boost to power through the day.

Similar to the Apple Fritter I did about a month ago on Gaia Farms, this will more likely than not appeal any Sativa leaning smoker out there. Even if you aren’t and are looking for a strain that will give you a boost throughout the day without getting boggled down might want to give this a try. Additionally, this will be received with enjoyment by any smoker who enjoys an all-around sweet and flavorful cultivar. The medicinal effects are sure to appeal to those who are looking for an energetic, spirit-lifting high. Overall, I really enjoyed this cultivar and thought it went about neck and neck with what I experienced from the one by Gaia Farms. However, being that this is a go-to day strain for me I wouldn’t be surprised if I have more Apple Fritter to review in the future.

Nonetheless, there were lighter green, as well as forest green, hues met with lighter purple ones that made up the majority of the structure. This all came together underneath a blaring trichrome coverage throughout each bud. Amongst that, a less than average amount of mixed-colored Orange pistils extended across the structure of each nug. The yield upon break up on this cultivar was exceptional giving me more bang for my buck when rolling up. Not to mention, breaking up this caused thousands of kief particles scurried across my rolling tray. The dry pull on this one had a blend of cheese and mustiness to it to partner along with a fresh cinnamon apple taste.

When I sparked up the Apple Fritter in an Organic RAW, a burst gassy sweet cheese set the first impressions upon the initial inhales. One the way out, I tasted those same cheesy, musty terps I did on the inhale. This is also when I got a taste of those cinnamon terps that I find so distinctive to most Apple Fritter cultivars I come across. The pulls were consistently gassy and, a little way into the sesh, I noticed a fruity, Red Delecious Apple taste from the joint. A little further into the sesh (about halfway through) that sweet apple taste became a little more tart and the pulls became increasingly gassy during this period. This led to some mild coughing but nothing too serious. Additionally, I experienced a shift from that musty cheese to more of a sharp woody taste on the exhale. The all around flavor was strong on this one giving this cultivar an ideal taste profile. In regards to the burn on this, the Apple Fritter resulted in a sturdy white ash with a minimal terp drip res ring that was more spotty than anything. This did burn a little quicker than I expected but did turn out to prove as a solid smoke nevertheless. 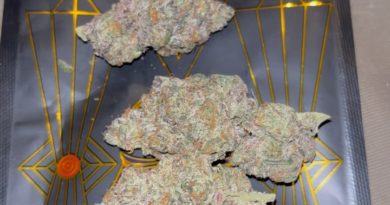 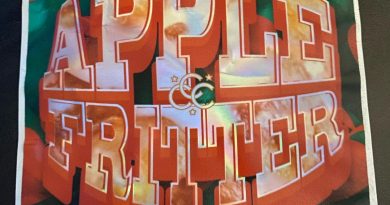