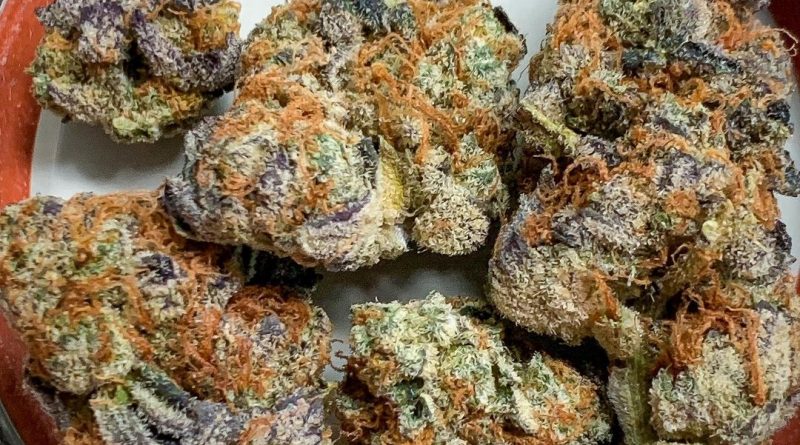 𝔸𝕡𝕡𝕖𝕒𝕣𝕒𝕟𝕔𝕖: My 3.5 of Cream Cake was comprised of multiple small to medium sized flowers which tightly cling and clump along their stems. At its base, Cream Cake possesses a light, almost pastel chartreuse green complexion with amethyst patches appearing all over. Blue violet sugar leaves paired with long, wiry pumpkin/blaze orange pistils pepper the surface. You don’t need me to tell you the trichomes on this one are crazy, amassing so densely and resinous they appear shiny in direct light.

ℕ𝕠𝕤𝕖: Cream Cake possesses a light. rubbery-sweet, musky/woodsy pastry-like aroma. Despite the strains name, it’s not the super sugary nose you might imagine – instead the strain lands on the doughy/starchy side, almost like a croissant, with notes of coffee bean, sour cream and menthol to compliment.

𝕊𝕞𝕠𝕜𝕖: As anticipated, Cream Cake provided that sweet, doughy inhale one would would expect from any “cake” strain, however the flavor was notably soapy, sour and creamy like an earthy vanilla greek yogurt or buttercream icing. I consistently pulled a piney and peppery “cream cheese” on the exhale, with a bit of citrus peel intermixed.

𝔼𝕗𝕗𝕖𝕔𝕥: I found Cream Cake to be a great, strong daytime hybrid with a gripping long-lasting head change and a relaxing affect. The high gathers quite in the head, reaching its apex quickly, whereas the loosening body affects creep into the equation over time. Hazy and stoney with a totally engrossing, “locked in” cerebral effect. Really great for a movie, video games, even work if you have the tolerance, but Cream Cake definitely makes multitasking impossible.