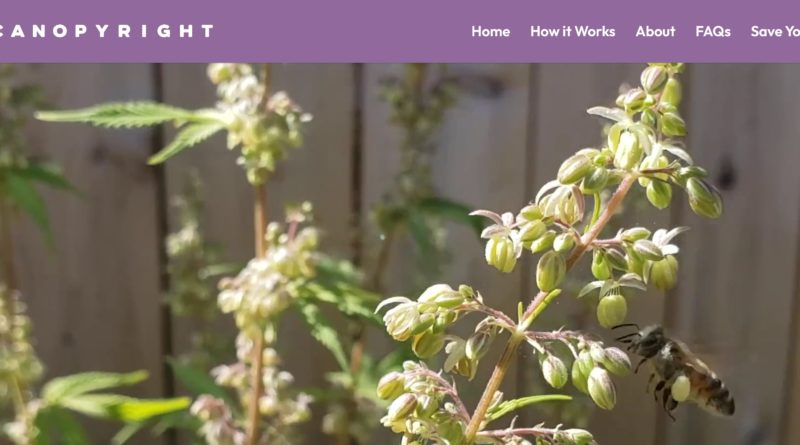 Canopyright is an intellectual property (IP) protection service developed for the cannabis breeder. The short and sweet of it is this: Canopyright has made a privacy first app that allows cannabis breeders to effectively archive their unique cannabis plants with a new form of cultivar licensing and even get paid for their hard work through licensing agreements. For the first time, a breeder can effectively establish prior art for their cannabis cultivar while maintaining complete privacy and physical possession of their cultivar.

As the cannabis breeder, all you have to do is save your cannabis leaves and tie them to a digital record through the website. You then store the time-stamped sample in your own freezer.

That’s right. #SaveYourLeaves. You need at least 3 leaves to be able to create your Canopyright time capsule for your cannabis cultivar. 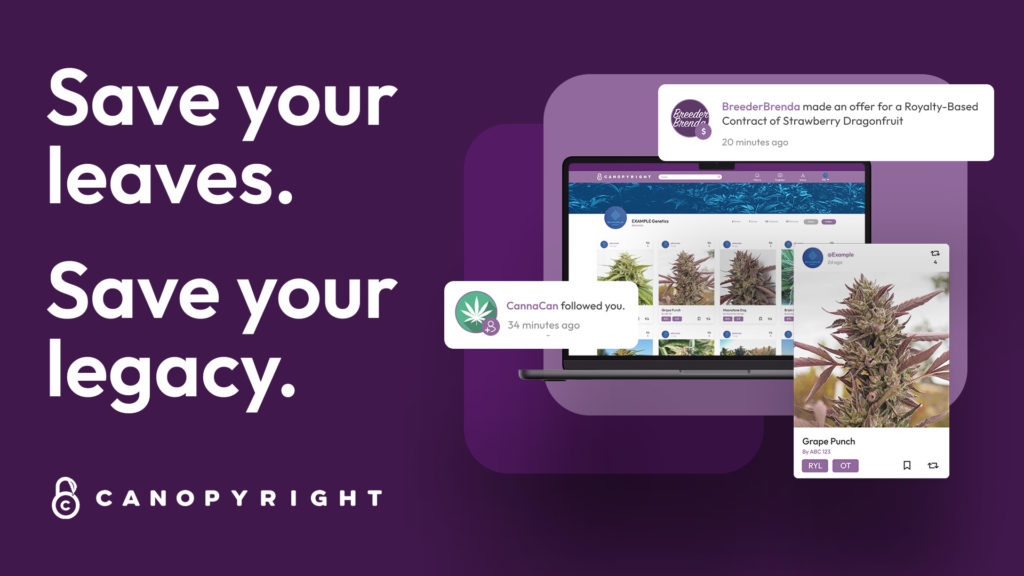 Of course, what Canopyright does behind the scenes to secure that data is a little more complicated.

What is Canopyright? How does it work?

Canopyright utilizes the recent innovations of blockchain and digital ledger technology with a meticulously designed contract law to provide a privacy-first digital “library” for cannabis breeders to submit cultivars to.

Specifically, the app uses the Hedera Hashgraph (not that kind of hash) to timestamp submitted data from cannabis breeders in a verifiable digital library tied to physical samples under the breeder’s control. Information from this distributed, hybrid digital/physical library can be shared on a marketplace for licensed breeders and growers.

In Canopyright’s own words, they’re:

Breeders can finally highlight the unique properties of their cultivars and growers can shop for new cultivars to license in a data driven manner. This data can be used to drive cultivar acquisition decisions on the grower end with the inevitable benefits of increasing cultivar variety and targeted medicinal effects eventually reaching end users.

Background: The Canopyright Team and how it began

The Highest Critic caught up with Jeff Hamilton (Founder), Kelsey Parker (COO), and Lelehnia DuBois (CCO) to get more details about this exciting new development.

Parker is a cannabis marketing specialist from Humboldt County that has previously designed digitalUI for cannabis brands such as URSA Extracts and Northern Emeralds.

DuBois is a familiar face to many breeders in the Emerald Triangle and is the founder of the Humboldt Grace Legacy Project.

Hamilton has been working as a cannabis lawyer specializing in cannabis industry transactions since the Prop 215 days.

He came up with the idea of Canopyright after a lunch with a cannabis breeder client that needed IP protection for his work. He envisioned a service that could combine blockchain technology and contract law to provide cultivar licensing without doing a patent process. Now in closed beta, Canopyright has taken no outside funding. Canopyright’s lineup of Breeder Advisors belies the importance of this project. Cannabis breeders will recognize familiar names such as Doc Ray, Kevin Jodrey,  Martin Yip, and others.

Hamilton described the core of how Canopyright is able to provide free IP protection to cannabis breeders in a video showing Canopyright to the Hedera community:

“[Canopyright] uses contract law principles and Hedera in order to create a system where we are defining a cannabis strain the same way that we define copyright.”

Canopyright: A “copyright” for cannabis breeders

Existing patent options for cannabis breeders include plant patents and utility patents, and even USDA PVP certificates for legal hemp cultivars. The problem with all of these existing options is they are prohibitively expensive barriers to entry for most cannabis breeders – and that’s without considering the privacy considerations. That leads to the current sad state of the cannabis industry which Hamilton describes succinctly:

“The vast majority of cannabis strains don’t have any intellectual property protections in any meaningful way.”

The annals or cannabis breeding history are filled with stories of rip offs and breeders not getting financial or reputational gain that they rightfully earned. Hamilton describes a canopyright as:

“An original work of cannabis breeding fixed in a physical plant sample.”

However, instead of a public physical location that you would have to display your original work, you can submit your original work of cannabis breeding to a digital library for display – kind of like a virtual herbarium – which is not just a funny name but also an established concept in botany and IP circles. Though, Canopyright is not a traditional herbarium. Hamilton explained:

“We’re basically taking the concept of an herbarium and modernizing it for a new era.”

Again – to be clear – This isn’t genetic testing, that would make participation too prohibitively expensive for the most cannabis breeders. Canopyright does not prevent a cannabis breeder from seeking additional protections from their plant. They can still register their work as prior art through other ways, submit their cannabis plant to a traditional herbarium, get genetic tests, go for a plant or utility patent, or anything really.

Hamilton confirmed that their licensing does not involve genetic testing and that’s why it’s free to cannabis breeders to use always:

“It leaves open the avenue for people to get genetic tests, register their strains on Kannapedia, and do all of the things you could do to get a patent.”

“We’re seeing this as the first step. [It] takes five minutes of your time. And it’s free.”

The process: So how does a breeder go from saved leaf to Canopyright?

This time capsule service is free to cannabis breeders. Hamilton was emphatic that this core feature will remain free:

“We are not charging the breeders ever.”

Unless they explicitly opt-in to paid add-on features, that is. Canopyright is not just free by default, but also privacy preserving.

The low down: How does Canopyright protect breeder privacy?

As a company founded by experienced veterans of the War on Drugs, Canopyright is aware that cannabis breeders are notorious for being skittish. The team explained the situation on the ground in the Emerald Triangle.

“A lot of folks won’t even give their genetics to get their DNA tested. They won’t engage in a licensing contract because they’re scared.”

Canopyright is designed to be useful and used by anyone with unique genetics. The team continued:

“Even if you’re scared, you can still create the backup.”

Canopyright is only available in California at the moment, as such much of the teams’ efforts have been geared towards onboarding cannabis breeders in the Emerald Triangle.

Canopyright has built privacy directly into their app. All information submitted by a cannabis breeder is encrypted using a private key which is only available on the cannabis breeder’s device. That means Canopyright can’t access your data unless you’re logged in and providing the key for them to decrypt it. Then and only then, the user’s private key is held in memory and is deleted from Canopyright’s servers as soon as the user logs out. The system was designed so that there’s no secret keylogger that copies the private key when the user is logged in and there’s no master key that overrides all of the private keys, either.

Breeders are in full control of their privacy settings.

“You can use Canopyright as your private archive. And you can toggle back and forth from keeping something private to listing it on the marketplace with just a single input. You can decamp things from your catalog whenever you want.”

If the DEA or any other federal agency wanted information on breeders and their cultivars from Canopyright – Canopyright wouldn’t be able to provide it. Information is only visible and searchable to the public if you are licensed and designate that you wish to participate in Canopyright’s cultivar licensing marketplace.

Cultivar Market: What kind of cultivar licensing does Canopyright offer?

Licensed cannabis breeders can choose to list their cannabis cultivars on the Canopyright cultivar marketplace. There, licensed growers will be able to browse available cultivar licensing deals, sort by desired factors, and enter into negotiations with breeders.

Breeders can set two types of contracts – one time payment contracts and royalty based contracts – as well as preferred contract terms. Since Canopyright is pulling data directly from METRC, Canopyright will automatically generate an invoice to get money from the correct grower to the correct breeder every time a licensed plant with licensed genetics is entered as making it to the flowering stage.

As an example, if Grower A and Breeder A agreed to $5.00 per flowering plant – then each planting season, Grower A would receive an invoice for however many flowering plants of Breeder A’s cultivar they have.

There’s no retainer that needs to be paid to get started, Canopyright only shares in the profit with the breeder when the invoice is paid. Hamilton emphasized:

“We don’t get paid unless the breeder gets paid. Ever.”

The future: Canopyright will unlock

Canopyright’s new type of cultivar license and the cultivar licensing marketplace will allow cannabis breeders to breed with confidence – resulting in increased variety of cultivars coming to the light. The market will have to redefine its definition of “rare strains” once cultivars like “Wet Mouth” start coming out. That’s right: a cultivar that does the opposite of cottonmouth. Don’t believe me? Hear it from cannabis breeder Kevin Jodrey’s own mouth.

The marketplace and the data generated by the economic activity of the growers and breeders will end up benefiting the entire cannabis community. DuBois explained how Canopyright’s data will allow METRC’s data to be more actionable for everyone in the community:

“That [data] trickles down to research to policy and it will give patients better medicine.”

Canopyright’s noticed that despite the amount of state legalization that we’ve had – right now patients still have no idea how to get true medicinal profiles. Their best bet is reading cannabis reviews on a site like this hoping that their endocannabinoid system is similar enough to the reviewer’s to guesstimate if the reported medicinal effects can be repeated.

The Canopyright team envisions a future where a doctor can use Canopyright’s data to look for a cultivar with high THCV and a Myrcene dominant terpene profile and receive METRC backed information on where their patient can find it. It may take a long while to get there but that’s the hopeful, inevitable future.

Canopyright is a new basic standard of IP protection that is becoming available to cannabis breeders. They are poised to provide a valuable service to one of the most underserved demographics in the cannabis industry – at no cost.

This is a crypto cannabis project that doesn’t have a cryptocurrency, doesn’t have any outside investors, but uses both cryptography and the Hedera cryptocurrency in combination with revamped-for-the-21st-century contract law to create an elegant solution for cannabis breeders to protect the cultivars that they have created.

While only cannabis breeders will be able to save their leaves, this app was built for the benefit of the entire community. In the call, Parker described Canopyright to me as:

That is to say: The Canopyright team is open to feedback from the community so do send it their way. If you’re a cannabis breeder that jives with that – you really ought to give Canopyright.info a gander.