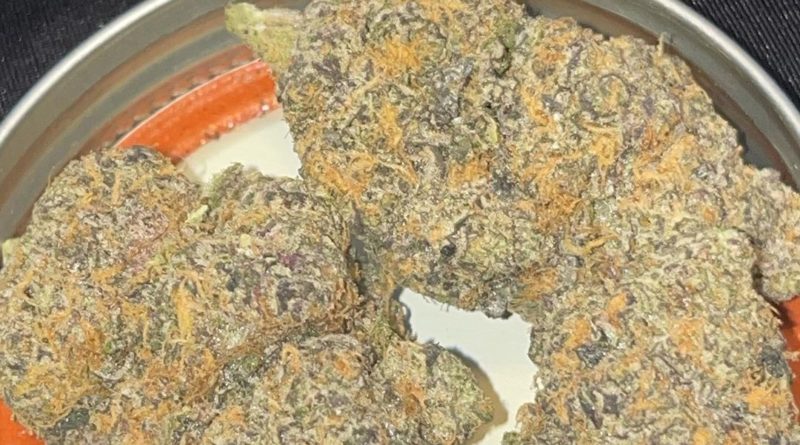 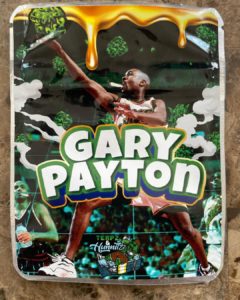 Hey what’s up everyone? I intended to have this back-to-back feature up a little quicker than I did but, as you know, sometimes life gets in the way. Any-who, I have a follow-up from the Grape Gas by Terpz n Hunnitz that features a cultivar that has became sort of a “new age” classic in the past few years. Known for it’s sweet, burnt rubber appeal, Gary Payton was amongst the handful of flavors given to me by Terpz n Hunnitz. If you are looking for some background info on him you can find that on my previous review. Although this may not be my first time reviewing this particular cultivar I still get some excitement to see how each experience will differ from the last when offered to me. After some positive highlights concerning the Grape Gas previously review, I had high hopes this check off even more boxes. Let’s waste no more time and get into the facts!

I received the Gary Payton in a standard, square Mylar bag with none other than the “The Glove” himself pictured on front. This one I can say was much more detailed oriented as it displayed GP going for a layup with a giant nug of bud in hand and a joint fire up. In the background, Mario Elie (left when facing) and Nate McMillan (right when facing) also have joints in mouth while Elie appears to have a jar of the Gary for good measure. Nothing over-the-top on he bag appeal but it definitely distinguishes what cultivar is being marketed.

When I opened the seal on the Mylar packaging containing the Gary Payton, a fresh scent of spicy carpet and rubbery earth notes exploded out of the bag. The closer I held my nose to it, the more I picked up on a nutty aroma throwing off a slight must filled with various earth scents. The nugs were humungous as this 9g quarter was compiled of about 5 nugs total. The portion was extremely generous I must say. Each one showcased a dense, sticky surface as the buds with compacted together holding a considerable amount of weight. Although this cultivar featured a slightly underwhelming trichrome coverage, it’s fair yellow colored pistils caused dizziness the way they wrapped around and intertwined into one another. This was all over a mix of violet and darker green hues that made up the majority of this cultivars colorway. They were a little bit tough when pulling apart, therefore, I preferred breaking this down in the grinder. When broken apart, this one had no problem sticking to the top of my thumb as I felt the terps drip off this one from within. I personally wasn’t that impressed by the yield this amounted to after broken up as it left a light sticky texture to the buds after doing so. This created a spicy floral aroma which filled the air around my coffee table including a linen-like overtone. Upon taking a dry pull of the joint, my mouth watered with spicy rubber terps followed by a slight sweetness of z.

When I sparked the Gary Payton up in and Organic RAW, the initial inhales contained a gassy layer of earthy and rubbery terps to kick off the sesh with a quick bang. While consisting of a smooth finish, the exhale provided a heavy dose of floral notes that were also gassy and evenly musty. Once I got to about a 1/4 of the way into the sesh, I honed in on that familiar burnt rubber taste this cultivar usually provides. This time around, however, this taste resulted in a tinge of z terps which encapsulated zesty floral flavor in my mouth. Additionally, I kept noticing a sweetness when releasing the smoke about every other pull. Inching towards the halfway point in the sesh, those floral terps experienced early on started to ramp up. Eventually the pulls became increasingly gassier ensuing in somewhat of a spicy chlorine taste once I got past those sweet, rubbery pulls. The Gary Payton had a slow, oily burn given its stickiness following the break up which ended up with a mixed lighter grey-to-whiteish ash. This also included a moderate-sized terp ring that dribbled down the sidewalls of the joint as well as circled around the top. I was very delighted by the small, but constant, shifts within the terp profile this batch of Gary Payton possessed. Nearing the tail end of the sesh, a plethora of spicy burnt rubber flavor remained bringing on a mild, but meaty, taste closing out with a flare. Although the joint did ooze up with resin towards the end I thought the flavor on this cultivar stayed strong throughout. All in all, I found the smoke on this Gary Payton to be quite likeable to say the least.

The onset of medicinal effects weren’t initiated until a good 10 minutes or so after the sesh. I began to recognize myself start to poke fun at and make inside jokes with my fiancé as this cultivar initially put me in a spiritually-risen mood. This eventually led to looseness of limbs within my lower waist trickling down to my quads and legs.

Additionally, I couldn’t help but laugh some of the high off as even some, less irrelevant, topics being brought up made me chuckle. Even though I had the urge to kick back and socialize while under the influence of this cultivar, nothing deterred me from any high-stress activities. About 30-40 minutes into the onset of medicinal effects, my perception was quite in tact which led to no issues holding it together. I remained cheerful as I began to develop a spark of creativity, boasting highly analytical conversations between my fiancé and roommate. After an hour or so, I did develop a mild hunger especially for bar food. Personally, I found the effects the Gary Payton put out easy to withstand either in public or on a night in the house. Apart from the balanced effects, the high lasted right around an hour an hour displaying a medium level of potency.

After having a chance to try the Gary Payton being offered by Terpz n Hunnitz, I will start off by saying that it did supersede my experience with the Grape Gasoline previously featured. First, the appearance on this cultivar was a lot more enticing this time around. Secondly, the smoke didn’t throw any surprises or leave you second guessing what was actually being offered. From textbook burnt rubber terps to sweet floral notes, the Gary Payton possessed and overall high smoke quality between potency and terp profile. Anyone who desires a little energy while developing an uptick in overall mood stability will love the qualities this cultivar has to offer. Especially if you are one of those who struggles with mood-related illness including rage, depression, and mania. Out of the flavors received from Terpz n Hunnitz I would probably put this near the top as it is provided a clean smoke that ultimately led to a positive experience. I will have two more reviews to follow covering Terpz n Hunnitz within the next couple of weeks. 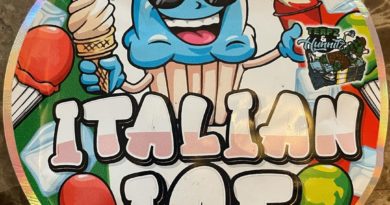 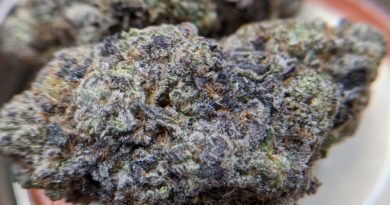