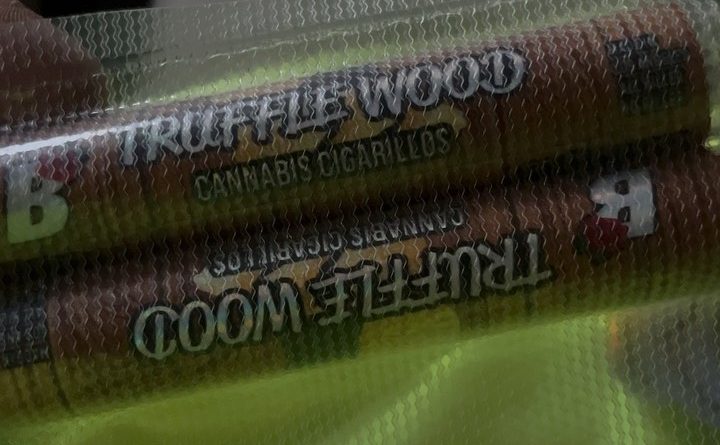 Not wood (truffle wood) by puro company and blackleaf 2 grams of white truffle x zkittle wood. Now when I first got this there was some confusion… I was told it was a hash hole. 2 grams flower and .5 rosin.

When I smoked it I didn’t smell/taste or see the rosin so I went and asked blackleaf what exactly was in it. He said no rosin just all flower. White truffle x skittle wood. Now not gonna lie I was pretty upset. I thought the price seemed low for a hash hole but that’s why I got it! Haha no one likes thinking they r buying something that turns out to be something completely different. With all that said…. For what these things actually are (a super high end blunt) they are awesome. First off every paper is picked specifically to match the flower. It’s not that cheap paper either. Forget what country it comes from but it’s the good stuff. That’s actually why the blunt is wrapped in a paper like that, because the leaf is so thin, it will break in the tube if not wrapped up. The smell of the blunt is incredible. Such a perfect combination with the earthy strain that’s packed inside. It also has a big glass tip that’s super convenient. I was already impressed. That was until I started smoking it… that’s when I was blown away. Blackleaf told me he smoked a ton of these because of how powerful the strain combination was…. He was not a exaggerating in the slightest. I got so high from this… one of the strongest highs I’ve felt in a while from just flower. I just kept getting higher and higher. After an hour I still felt like I was getting higher by the minute haha. Super long lasting too. This was such a pleasure to smoke too. Tasted super good and just had me feeling like a boss as I smoked it. If they weren’t so expensive I would honestly smoke these ALL THE TIME! Such an amazing and creative collab between these two. These are to lowest priced ones but they have ones all the way up to 10 grand! Definition of luxury smoking. If u want anymore info on puro company check out the firstsmokeoftheday podcast where they had the owner on. Overall if you can afford one of these then I highly highly suggest grabbing one. They are not easy to find and aren’t sold in stores so if ur lucky enough to come across one grab it! And let me know where they at! These things are the definition of luxury smoking!