Hey what’s up everyone? Happy Father’s Day out there to all the Dads tuning into the page. I’m back with another review to close out the week. Today, I have some more local flavor to analyze including some content from the Gastro Pop Pheno hunt That Kid from Chelsea is running. When I saw a fellow reviewer and friend, Digital Smoke, put up a review on the T-Scottie from Kid from Chelsea I was intrigued. After chopping it up a little bit with him I received some of the T-Scottie and Gastro Pop #10 (Blueberry Waffles). I learned that he has been at his craft for 10 years now and prefers to grow organically by hand using still water. As some of you may have noticed, I’ve been lucky enough to have found a handful of hidden gems since I’ve started dabbling more and more within the local small batch market. In hopes that this trend will continue, I will be covering the Gastro Pop #10 today aka Blueberry Waffles which was hunted by That Kid from Chelsea. Gastro Pop, which features a cross between Apples n Bananas and Grape Gasoline, was originally bred by Compound Genetics. Knowing that this particular cultivar typically holds an even mix of fruit and gas, I was anxious to see what this pheno would possess. Let’s waste no more time and get into the facts!

There’s no explanation needed to be given on the packaging on this one as I received both of my samples in a zipped sandwich bag. He didn’t even bother to label each one as he told me there wouldn’t be a challenge involved determining which one was the Blueberry Waffle. True to his claim, I was hit with a sweet, syrupy smell of blueberries and wheat upon opening up the bag. It was neither hard to tell each cultivar apart from one another nor the decision of the name this pheno was given.

Light in hand, consisting of an airy, and fluffier structure while coming out of the bag, the Blueberry Waffles had shiny aesthetics. Pale green in tone underneath a blizzard of trichromes, this cultivar had to be held close to the eyes to pick up on the details. A mix of flaky, forest green and violet colored leaves spread across each nug including an abundance of brown-to-orange pistils too. One thing I was not too hot on was how stemmy they were as I noticed myself pulling out tiny sticks when breaking the buds apart. Nonetheless, the Blueberry Waffles were no problem at all breaking down by hand and did yield surprisingly well. The break up was messy leaving scattered particles of kief spread out across my rolling tray. Once I proceeded to take a dry pull from the joint, a flavor of sweet diesel berries coated my mouth as I received the same creamy wheat blueberry taste I got on the nose.

When I sparked the Blueberry Waffles in an Organic RAW, I gained a sweet taste of creamy diesel and sweet berry terps to go with moderately gassy pulls. On the way out, the berry taste was retained as I let out sweet, musty terps culminating in a delectable flavor. A little ways into the sesh, I felt somewhat of a gassy tanginess start to set over as each pull picked up the intensity. The sweet berry taste experienced a touch of sour that gave away more power than right at the start. I also noticed a sweet and cheesy taste on some of the exhales after that sour taste began to die out. At some points, it was difficult to tell what you were going to get out of this one although the berry terps remained thick throughout. The burn was fairly decent on this giving off a lighter gray ash with some darker spots in there at times. This did manage to put out a solid, and drippy, res ring which dropped stains down the side of the joint. The further I got into the sesh, each pull seemed to be more pressure-some than the last. Around 1/4 left, I honed in a lingering perfume taste which ensued after a slew of bitter berries. Down to the final pulls, I was very impressed with the overall flavor the Blueberry Waffles packed within its profile. All in all, the smoke was fitting and gave truth behind the name picked for it.

The onset of medicinal effects from the Blueberry Waffles started off quick. Within about half way through the sesh is when I started to feel a little bit loopy as a moderate raciness developed within the top of my brain. 15-20 minutes later I noticed the head rush I was experiencing slowly develop while, at the same time, a spark of energy entered my loins. Additionally, my perception was on high alert and I found myself dealing in social situations with ease minus the baggy eyes. Possessing a positive mind-state as well as a cheerful attitude, this cultivar seemed to bring out the better side of my personality. I tended to enjoy the effects while outside, preferably at the beach these past few weeks. Being that this was a high that gave me a boost, it was only right that I would allow it to help me enjoy these recent summer nights. Unfortunately, this wasn’t a considerably lengthy high as the medicinal effects wore off right around a little over an hour. While they did pack a nice punch, I do remember this being somewhat of a let down in my opinion considering expectations.

After having the chance to finally experience a personal creation from That Kid from Chelsea as well as the Blueberry Waffles pheno from his Gastro Pop hunt I thought this held its own. It goes without saying that if you have a personal preference for any type of fruity terps, especially blueberry (like myself), this will satisfy your palette. The flavor alone is a strong point within the experience as the smoke gives out a bit of gas as well. Although I did have my gripes with the duration of how long the medicinal effects lasted, I still think they will be enjoyed particularly from those who want an energetic, spiritually uplifting experience. Not to mention, I believe those who struggle with anger-related symptoms or depression would probably thrive from feeling the effects of this cultivar. I wanted to thank That Kid from Chelsea for getting this one in my hands and I should have a follow up review on his staple, T-Scottie, in the near future. 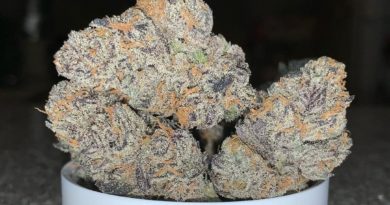 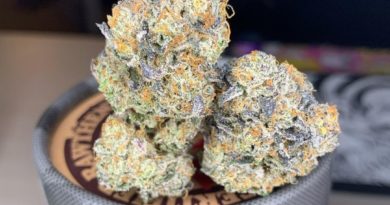