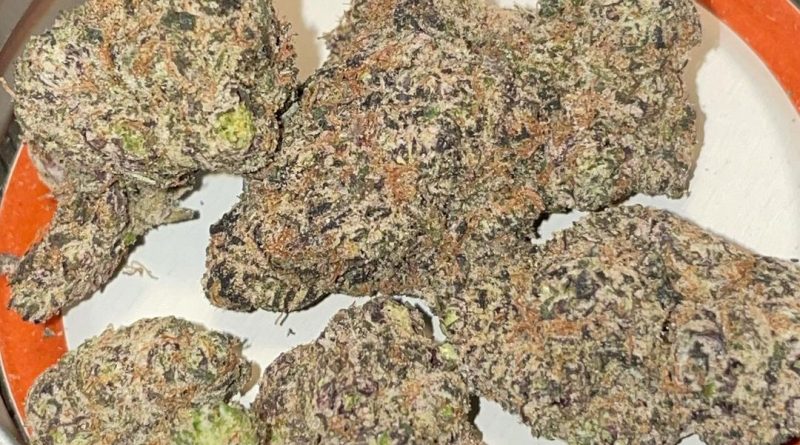 Hey what’s up everyone? I hope you are all enjoying your weekend and not thinking too much about how tomorrow is Monday. Today I have the second installment for the double-bag review I’m doing on Boston is Potent. Yesterday we covered the White Limonata and today we will wrap up by going over the Moneybagg Runtz. I didn’t receive any information regarding the breeder/cult on this one either so I left it undisclosed. Given the name of this offering, I was highly anticipating another flavorful smoke similar to the White Limonata. Let’s waste no more time and get into the facts.

I explained the concept of the double bag on my previous review so please feel free to check it out and circle back. Personally, I believe the bag appeal on the Moneybag Runtz was fairly standard. It features the BIP bear double-fisting a couple Turkey bags of cash with the overall layout being considerably flashy. This one in particular didn’t stand out to me but BIP is known for having some creative concepts on their bag art over the years.

Although I was disappointed with the smoke, the medicinal effects that were felt from this offering were above par. This was definitely an indica-dominant offering as I felt similar effects to the ones experienced with the White Limonata. The Moneybag Runtz sedative effects could particularly be felt within the shoulder and back region. This induced the body in a deep message state which created sort of a sleepy sensation. I also endured the same cement shoe feeling I had with the previous offering which left me stuck to my chair. In addition, to the bodily effects this created I also felt a bit a throbbing pushing against the front of my eyes and face. This wasn’t a painful feeling but certainly described some of the cerebral effects felt from this offering. If there was a highlight with my overall experience while smoking the Moneybag Runtz it had to be the carefree aura this present while smoking especially towards the end of the day.

Personally, if I had to give a recommendation I’d probably tell people they’re better off with the White Limonata. However, I believe that the medicinal effects that the Moneybag Runtz gave would be a fit for those who are experiencing any pain-related illness, insomnia, or depressive symptoms could find hot within the high created from this offering. Unfortunately, from the experience I had with the smoke on this I don’t believe clean smoke or white ash enthusiasts would find this enjoyable. Despite the Moneybag Runtz seemingly falling below expectation, I think the double bag concept is very innovative idea to advertise variety to the consumer. Considering the reputation BIP has built over the years I think it is safe to say this won’t be the last time seeing them.

When I sparked up the Moneybag Runtz in an organic RAW, I received the same Cherry terps I expected to upon the initial inhales. Although the taste was bit stale for my liking, I did notice pulling in terps of unripe citrus, floral and pine. The nutty flavor was retained both throughout the inhale and exhale similarly to that bitter cherry taste. Additionally, I found it odd that this lacked any distinct candy taste or z terps given it had Runtz marketed in the name. Nonetheless, this did pull fruity flavors throughout the sesh until about a quarter of the way left. At this point the joint became a little too caked up with resin which made it difficult to pull consistent hits. The Moneybag Runtz did have a nice and slow burn, however, it did result in a fairly inconsistent ash. For example, at certain points of the sesh yielded a salt-and-pepper grey whereas other times it was a fairly lighter color. The pulls were also considerably harsh which I think can be attributed to a poor flush and cure during cultivation (not positive but my best guess). Overall, I think I’ve gotten quality offerings most of the time from when dealing with BIP but this one missed the mark a bit.

When I opened the seal on the Moneybag Runtz, I was hit with a fruit punch cherry nose mixed with a dose of nuttiness, citrus and pine. Even with the name Runtz in the title I knew this was a Cherry Gelato cultivar with my eyes closed. This smell was awfully pungent and I almost got a similar scent to when you rip open a pack of Cherry Airheads and put it up to your nose. I saw a similar appearance to the one I did with the White Limonata. The Moneybag was was a little more purped out with darker-colored hues; however, this had considerable trichrome coverage that gave the body structure a frosty coating. Similar to the way I received the White Limonata nugs, these were condensed and the pistils seemed a bit packed in. The nugs looked a bit smashed up as well. Those things aside, the fluffy, sponge-like texture of the buds was average to pretty much most gelatos you’ll find nowadays on the traditional market. This resulted in a moderate breakup but did call for a little bit extra to stuff out the joint. Not to mention the bud had a cherry air freshener smell upon breakdown that was sort of on the bitter side. I received almost the same taste on the dry pull translating to cherry and almonds with a slightly acidic feeling left on the tongue. 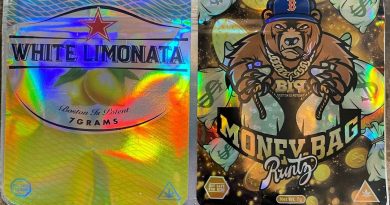