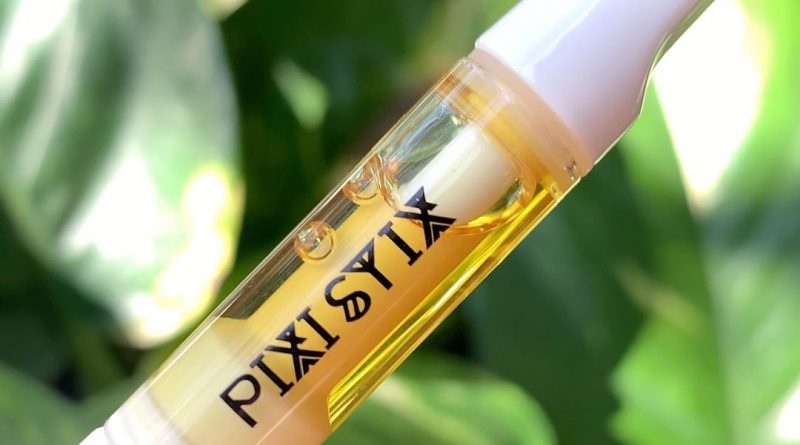 The last in a series of reviews highlighting my recent visit with Flower Bomb, I decided to try out their Pixi Stix distillate carts after long being intrigued by the full ceramic 510 vape design and its impact on the overall vaping experience. Below are my honest thoughts.

Pixi Stix’s box and cartridge design are minimal – the cart itself is ceramic and all white (minus the actual metal thread itself) with the pick stick logo printed on. Likewise, the box has the logo, strain sticker, and your typical CA warnings. No lab test info available on the box, but the IG posts a lab test screenshot of what I assume to be the distillate batch. Pixi Stix distillate takes on a golden poppy yellow color with a thick, honey like consistency.

Flavor-wise, I grabbed two more common strains – Gelato and Pineapple Express. With both carts, I found the flavoring to be quite mild in all honesty, but refreshingly so. In comparison to other carts which can taste too strong, too chemically and too artificial, Pixi Stix ratio retains your basic distillate palate as your predominate flavor. “Strain specific” terpenes take a backseat role and accent each hit, more akin to fruit infused beverages. The Gelato cart had a sweet, mixed berry taste, whereas the Pineapple Express emphasizes more of a tropical punch/pine.

From a potency perspective, I am happy to report Pixi Stix score similarly to other distillate brands on the market. It’s not the strongest distillate cart I’ve ever smoked, but lands on the average to stronger end, and a few quick puffs will bring on that desired head change or keep an existing high afloat. Perhaps my favorite part about these carts is the pull itself. The ceramic structure does a fantastic job keeping the oil in a sweet spot temperature wise where the vapor isn’t hitting your lips super hot. Not to say you won’t cough, but each hit is noticeably less harsh than other carts.
#Budfinder
•
•
•
•
#dcbud #dc420 #420 #dcweed #stoner #marijuana #dccannabisculture #strainfinder #thc #dccannabis #puffpuffpass #dopesmoke #dmv420 #topshelf #stoner #cleanmeds #i71 #flowerbomb #pixistix