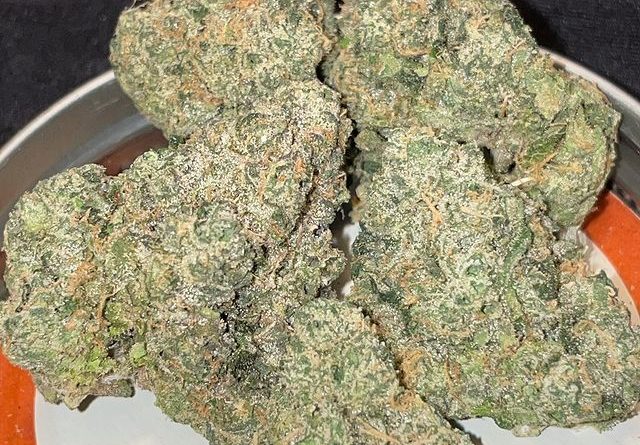 Hey what’s up everyone? Has the time flown by this week! I hope everyone is well and, hopefully, has some good plans coming up as we approach the weekend. Following up from my previous review on Frew Tree’s cut of Candy Fumez #1, I will dive into pheno #6 from that same hunt. I won’t get into too much of an introduction as, by now, most of you probably know who Frew Tree is if you’ve been a follower of my page. After a total package experience delivered by the Candy Fumez #1 I was thrilled to see what #6 had to offer. Additionally, I was curious to compare and contrast pheno 6 versus 1 as the differences I’ve seen from previous hunts I’ve tried from have personally fascinated me. The first one I thought leaned more on the Sherbanger side although exhibited some balanced qualities between the lineage certain parts. Let’s waste no more time and get into the facts!

The Candy Fumez #6 was received in a ziplock bag the same way that pheno #1 was. Upon opening the bag, I received a very sweet scent of candy, as well as citrus, that contained a spicy backend. Additionally, I honed in on a decent amount of floral and vanilla notes that added all-around to the creamy appeal this cultivar possessed. Pheno 6 had a way sweeter and candy-coated nose than pheno 1 did. When I displaced the nugs onto my rolling tray, I discovered bright, lime green hues resembling a Zkittles-dominant appearance with the awkwardness in structure from the Sherb in this cultivar’s lineage. Each nug presented a fair amount of density although this was a little more squeezable than pheno #1 was. Additionally, pheno #6 hosted a thicker trichrome coverage as well as more of an abundance of faded red pistils amongst the surface of each nug as opposed what I saw with one.

Once being cracked open, the buds threw off a gassier, fuel-like scent that gave off heavier vibes of vanilla frosting with a whole lot of candy notes. If you are a sucker for z terps than this would fit the bill perfectly. Giving way to faded yellow and light green colors on the interior, this pheno was also manageable to break down either by hand or in the grinder. While the grinder made things easier I did prefer using my hands to break this pheno down into larger chunks to enjoy the burn more as well as to maximize my yield. When broken down I got some sweeter notes of lemon, strawberries and citrus grapefruit combining with the ungodly amount of z with a backend of chem. This was truly one where I would keep holding up to my nose to see if I could detect something different each time. As I went to take a dry pull from the joint, an explosion of sweet, creamy flower petals including a gassy layer of candy blessed my lungs, serving as a sesh teaser.

When I sparked the Candy Fumez #6 in an Organic RAW, the presence of the Zkittles within the lineage could be felt from the beginning of the sesh. I let in that traditional candy flavor pairing with creamy and spicy floral notes that tickled my taste buds. While I did get a zesty soapiness from the overabundance of Z, this pheno was very sweet and a little more mild-manner considering the gassiness compared to pheno #1. On the way out, those same creamy, candy terps followed through but with a mustier back end.

As I progressed about a quarter of the way in I noticed the zestiness of each inhale heighten. Pheno #6 did not throw as many carbonated citrus terps as pheno #1 did but this did have a creamier, more delectable taste than the previous offering. It’s almost as if this threw somewhat of a gelato/Runtz vibe but with more power. I didn’t think the burn was necessarily great as it was slow-burning but ultimately being caked up due the oiliness in the joint. Nonetheless, the burn did result in a fat white ash that included a massive terp ring circling around the joint. This one seemed to last forever near the halfway point as I began to feel those gassy floral notes pick up as the Sherbanger within the lineage kicked in. I also noticed sweeter fruit notes than the more generic citrus ones noted earlier in the sesh. While this occurred I concurrently tasted nutty pine notes more on the back end each pull. There was absolutely no shortage of flavor on this one nearing the final stages of the sesh. Moving into the latter part of the sesh, I wasn’t surprised that this lost a tidbit of flavor due to the oiliness although I did ride out the z terps that held true throughout. While my impressions of the terp profile on pheno #6 may have been more fond than that of #1, I think the potency fell a bit short on #6. Regardless, this pheno was a very smooth smoke that gave me the craving for more Z afterwards.

The ensuing medicinal effects provided from Candy Fumez #6 did not waste nearly as much time getting into action as pheno #1 did. Right around the halfway mark in the sesh is when I started to feel as if my body was sinking downwards. This was complimented with a strong numbing sensation that overtook the joints within my upper body down to about my ankles. I had the same cheery, upbeat mood experienced with pheno #1 while, concurrently, feeling displaced in thought at the same time. Within 30 minutes into the onset of effects there was a great deal of mind-wandering I had to overcome to stay focused.

Although I wasn’t as incoherent as displayed while dabbling with pheno #1, pheno #6 certainly held more of a nighttime, couch-lock appeal than anything. I did notice my carefree vibe continue to prolong as I moved about an hour into the effects. While I did fumble my words a couple times, I just enjoyed kicking back and enjoying my surroundings on this one regardless of where it might’ve been. The duration of effects did not persist as long for pheno #6 as, in total, the medicinal effects last a good hour and half but nothing longer. I felt as if the effects could have packed a little more pizzaz although it was doable.

After having a chance to try the Candy Fumez #6 proceeding my experience with the Candy Fumez #1 I believe this one fell a bit short when taking everything into account. While the appearance was up to par, the nose was phenomenal as well as the terp profile, I believe other areas (such as potency of smoke and medicinal effects) could use a little improvement. As mentioned various times throughout the review, the z terps on pheno #6 were defined as ever, making it a no-brainer for those smokers who can’t get enough candy. The creamy, candy-blasted mix with a spicy backend made the terp profile on this pheno timeless. Although I did say the medicinal effects needed some improvement I did think that they fed off some indica-leaning features. I believe pheno #6 will be a lot more beginner friendly than #1 was as a result of this. However, this still will serve beneficial to those who have various pain-related illness as the deep state of relaxation this put me in served well for a couple sports injuries I’ve been coping with recently. Once again, I want to thank Frew Tree for getting the two standout phenos from his recent hands in my hands to review. I’ll be sure to have more material from him in the near future. 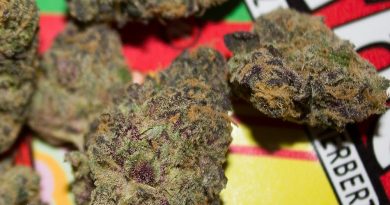 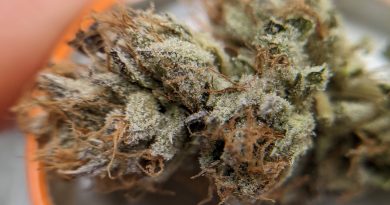