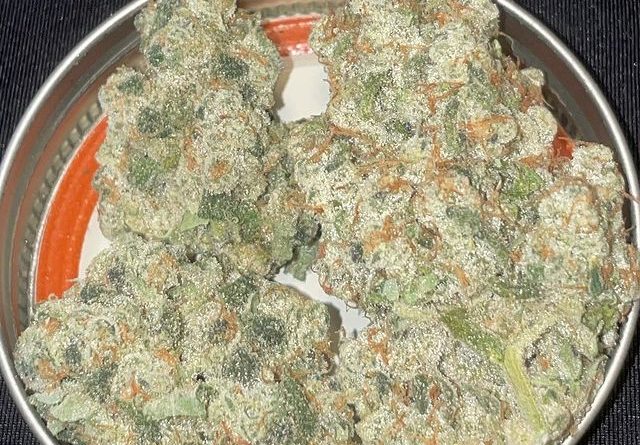 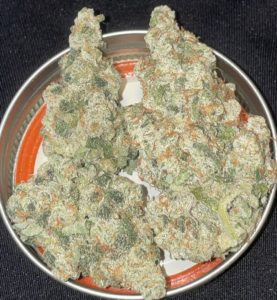 Hey what’s up everyone? I’ve been a little busy over the past week and haven’t gotten the chance to get a review out. However, I have a good one for all of you today featuring a returning member to the page. Pax Genetics, who is indigenous to the same area as I am in Central Mass., recently linked with me so I could have the chance to get my hands on some of his most recent grows. The next two reviews I will be posting will cover this recently received material from Pax. I am going to kick it off with the Dual OG he harvested which happened to be the most anticipated from a personal standpoint. Featuring a cross between Banana OG and True OG, the genetics of this one went through a few hands before finally getting into Pax’s hands. Originally bred by In-House Genetics, this one went through FreshCoast and the Honeysticks after Beleaf hunted this particular pheno before, finally, getting to Pax. Gaining significant popularity through The Honeysticks team over the past few years, I’ve always kept a close watch on this cultivar. And, of course, with the OG craze back in relevance this year it gave me the hankering to see what this cultivar boasted. Let’s waste no more time and get into the facts!

When I received the Dual OG, along with the other three cultivars, they came individually wrapped up in ziplock bags that were consolidated into one of Pax’s trademark mylars. Immediately after opening up the bag containing the Dual OG, I was smacked with ultra sweet and tangy notes of overripe banana and other fruits. The overripe banana aroma was extremely distinct on this cultivar giving it nose very similar to that of the fruity kushes I used to see lot in high school/college.

The Banana OG within the lineage dominated in the early stages of the sesh. Sharper notes of floral began to erupt from the taste of sweet and sour bananas around 1/4 of the way the sesh. Between 1/4 to 1/2 way I discovered he exhales giving off an earthier, more oak-like taste. I still found the pulls to be manageable as an aftertaste of sweet linen left sitting on my breath. The burn this cultivar displayed was, for the most part, stellar despite being chalked up with res at certain points. A darker grey ash ensued from this (with some white spots) carrying a relatively thick terp resin circle around the joint. Moving into the second half of the sesh, I still brought in a decent amount of fruity terps, primarily overripe bananas. The pulls eventually became more sour than earlier on making them more gassier in the later stages of the sesh. Again, the pulls were overall manageable and didn’t have the gassiest appeal I’ve ever seen. A true OG came about the more as time elapsed. The sesh closed out with heavy notes of sour and lemon citrus notes as the once banana taste dissolved. All in all, I thought the Dual OG had a very desirable terp profile even though I didn’t think this packed as mean of a punch as it would.

The medicinal effects prescribed from the Dual OG were easily the main attraction of this cultivar. The onset of them started, give or take, around halfway through the sesh ash my eyes became bloody red with a dryness that made the room flicker a bit. I started to notice a sensation in which the effects were pressing right against my forehead for about the next 15 minutes. Directly afterwards, a severe paralysis began to take over my limbs effecting me all over, from neck down to my toes. Even though this brought about a very crippling feel for the first half hour of the sesh, my mood was upbeat as ever. The butterflies that formed within my chest sparked a euphoria, upon my delight, that built self-confidence in myself.

While I did feel slumbered from the effects the Dual OG presented, juxtaposed, I had an ambition for being social while under the influence of this cultivar. Personally, I thought this made the Dual OG perfectly enjoyable for a night in my fiancé or friends. However, if you are looking to go out, I would say keep the gathering small in this case so the effects don’t become overwhelming. At certain points, I remember collecting myself and thinking of how happy I felt. About an hour in on this I felt like I was slightly levitating (almost floating) while still experiencing the same upbeat euphoric effects from earlier. When it was all said and done the effects last for a good hour and half to two hours. In my opinion, the effects were some of the most desirable I’ve experienced in recent memory making the high on this more than sufficient.

After having a chance to try the Dual OG cultivated by Pax Genetics, I must say I was impressed with most areas present within this cultivar. Starting off with the magnificent appearance of this cultivar that made it an easy sell once I first laid eyes on it. Following up on this was the nose that brought on everything from overripe bananas to those sour OG notes. This won’t take much convincing to try if you’re a fan of sweet and fruity weed. While the Dual OG carried a moderate gassy smoke it was the terp profile that stole the show in my opinion. Especially the change between sweet and sour fruity notes to more of an OG chem at certain points will make this cultivar approachable for a wide array of smokers. In addition to that, the medicinal effects were another likable feature of the Dual OG. Personally, I believe the effects this cultivar carries is for more experienced smokers that enjoy a crippling high but, at the same time, desire to feel positive and upbeat. On the medicinal side, this will be a no brainer for those with depression amongst other mood-related illnesses. I want to thank Pax for landing this fresh sample of Dual OG in my hands. I should have a follow up on his Gushmints within the next few days.

Each nug consisted of big, fat and lanky colas, that were every bit long as they were awkward. A mixture of lighter green hues with darker forest green leafier patches including some spots of amber, this cultivar didn’t hold back on its beauty. Under the mag jar, the Dual OG was seemingly swollen in white-to-amber colored trichromes as well as the intertwining pistils that were tucked into the interior in most areas. When placed in hand, each nug had a considerable amount of weight although the texture was fluffier, more airy, than I had anticipated. As I broke into one of them I felt as if I were getting the more solid, stickier, version of this cultivar. I could tell now where the weight came from as I noticed a Juicy fruity smell linger after being cracked open. The aroma also held a balanced combination of those overripe bananas detected earlier along with shortbread cookies. Once again, the nose was way more fruity and terpier than overpowering in my opinion. Although I preferred to break the Dual OG down by hand, I didn’t mind putting it in a grinder either at times. I felt as if the grinder gave a kiefier yield whereas hand broken gave me nugs that burned slower. The residue left on my hand was serious and did require baby wipes to remove. After breaking the buds down, the odor this cultivar exhibited fell on the sour/citrusy side giving off classic notes of OG and borderline sour bananas. The dry pull was also fruity as I let in an even amount of grapes, bananas and strawberries within the taste.

When I sparked the Dual OG in an Element paper, the initial inhales matched a lot of qualities within the nose as they were packed with sweet and sour bananas, boasting stronger pulls than I had intended. There was also a considerable amount of mustiness that expelled from the taste of bananas early on. On the way out, I gained the same mustiness I did on the inhale which also made the taste of sweet bananas prevalent. 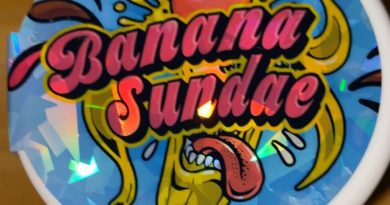 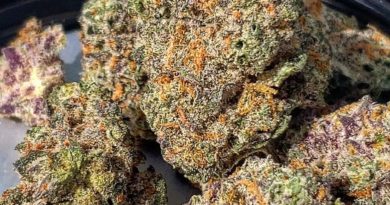 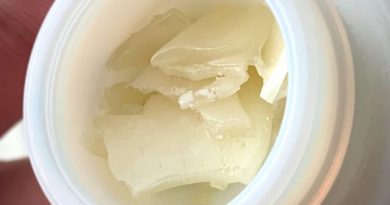