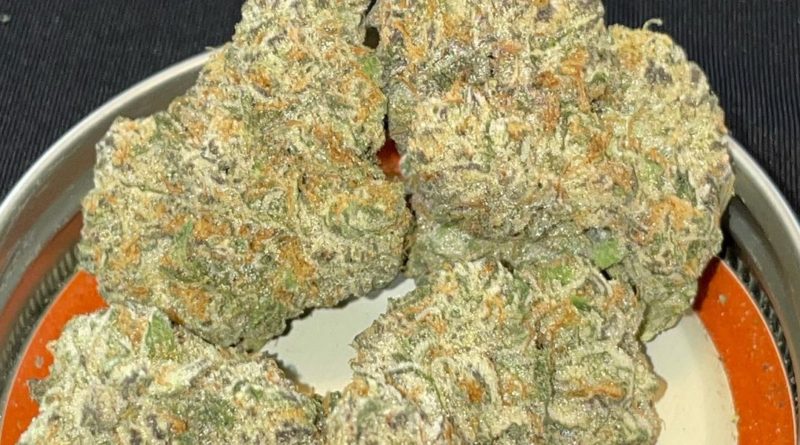 Hey what’s up everyone? Happy first day of June! Crazy to believe that we are already 150 days deep into the new year but, nonetheless, we are here. Today I have a returning member to the review page none other than Frew Tree who, recently, gave me a couple new samples to try from his latest harvest. Since the other cultivar is one I haven’t tried before I figure I would start off by reviewing the more frequented one of the two. Actually, when it comes to Kush Mints, I want to say that this is the third or fourth time I have reviewed this particular cultivar. Even though I’ve been on a hiatus from Kush Mints the past few months, there was a period when this cultivar was becoming a formidable, and go-to, day smoke for me. After a few good encounters with product from Frew Tree’s collection I was more than ready to give his version a shot. I’ve always had a knack for the creamy, cakey terps that this cultivar tends to put out. Let’s waste no more time and get into the facts!

When I received the Kush Mints, they were gifted to me in a traditional zip lock bag. To add to this, both offerings came in zip lock bags which were packed in one of Frew Tree’s logo’d and latched mason jars. Once unlatched, I didn’t receive an overwhelming nose on this. While honing in on a sweet cream smell I mostly sensed a large earthy scent loom over this offering. Once taken out of the jar and held closely to my nose, I made out a sweet, buttery layer of vanilla pine. Standing tall with long and lanky colas these buds were exceptionally appealing to the eye.

Consisting of forest green leaves, bright violet hues and a blaring trichrome coverage, the overall look the buds possessed were pretty sharp. This included the fact that the pistils were well in tact wrapping throughout the body structure. Each nug felt thick but crisp enough to break open by a little force from my fingers. When doing so they emitted flaky kief particles across my rolling tray forcing me to keep baby wipes for my fingers. I also could smell a faint fuel smell, as well as minted floral, while doing so. Breaking this cultivar down was cinch as the end result were fluffy pieces of nug with an added layer of kief on top. At this point I caught I slight coffee smell deriving from those cakey and doughier terps felt earlier. Upon taking a dry pull from the joint I ended up with a sweet, creamy fuel-like taste with sudden earth overtone.

When I sparked the Kush Mints in an organic RAW, the initial inhales contained a sweet and creamy kick to start off the sesh. It didn’t take me by surprise how this one taste up front and, in all honesty, I actually anticipated before trying. First thing that caught my attention on this was an added spiciness to each pull more so than I’ve experience with this cultivar in the past. On the way out, I let out a traditional taste of sweet and musty cake terps accompanied by a dull pine. The taste simply mirrored itself throughout leaving no doubts in mind that this was the real thing. While the pulls early on were quite mild, that spicy taste mentioned before added a bit of power as the sesh moved on. Although the gassiness of each pull increased at this moment I don’t see this being a problem to endure even if you’re along the lines of a beginner. Throughout each exhale I gained a familiarity with a sharp woodiness formed which complimented those piney notes quite exceptionally. Additionally, touches of coffee cake and sweet fuel added some excitement as the once creamy taste dissipated. I can’t say there was much that stood out apart from the fact that this tasted like a solid batch of Kush Mints. The burn on the cultivar was impeccably even and well-paced. This ultimately produced a lighter grey to salt-and-pepper ash with an underwhelming terp ring. I was actually taken a bit by surprised from this given the sticky texture and flavor it threw off initially. Nonetheless, this did strike me as one of the gassier offerings of Kush Mints I’ve seen in recent memory. All in all, I thought between the smokability and terp profile, this cultivar was all-around decent.

While I usually anticipate a spirit uplift and a spark of creativity, this one hit me with more of a well-rounded high. Before I got done with the sesh, I felt the onset of effects hit the frontal lobe of my brain. Due to the added gassiness from the smoke, this one hit the body more than experience in the past. My upper body and arms felt like they were almost turning in slow motion as my mood started to lighten.

This cultivar led to an increased mood, uptick in heartbeat, as well as imaginative thoughts. Contrary to past offerings of Kush Mints I have tried, I didn’t feel any instant spark in creativity nor any boost in regards to my overall perception. If anything, about 30 minutes from the onset of medicinal effects I sensed my ears ringing mildly as the top of my eyes felt like I put a 15-pound dumbbell on them. I didn’t sense sleepiness nor dreariness, however; this one created continued slouching and lower level of energy than forecasted. Beholding potent characteristics when present, I was actually surprised the medicinal effects on this round of Kush Mints wore off after an hour or so. While my past experiences haven’t been super lengthy I just felt like this one wore off before I got warmed up to it. Overall, the medicinal effects took my through a loop and possessed some likeable traits but the overall duration would be my main complaint on this one.

After having a chance to try Frew Tree’s Kush Mints I thought it was good but didn’t satisfy my palette the way I thought it would. I think this was due to my personal preferences at the time more so than the overall quality of work. Lately, I’ve had more of a knack for candy and/or powerful, “knock-you-on-your-ass” type cultivars which I believe contributed to me not liking this one as much as I should’ve. In addition to this, I sampled this right coming back from a 3-day trip which may have had some impact too. Nevertheless, I think first off the nugs received were stellar with the nose putting out a stereotypical Kush Mints vibe from the start. If you’re anyone who enjoys this cultivar or savory creamy, coffee cake terps will want to get their hands on this batch. Especially those who enjoy a mild gassiness to compliment will massage their appetite for this one. While I didn’t find the effects superb, I do think this is an extremely balanced high that would be suitable for either day or night time use. I want to thank Frew Tree for the opportunity to try this one and I should have a follow up on his Guava Gelato within the next week or so. 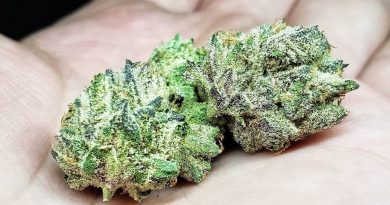 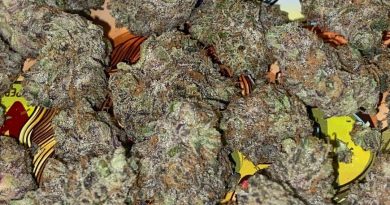 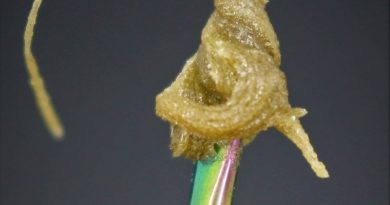