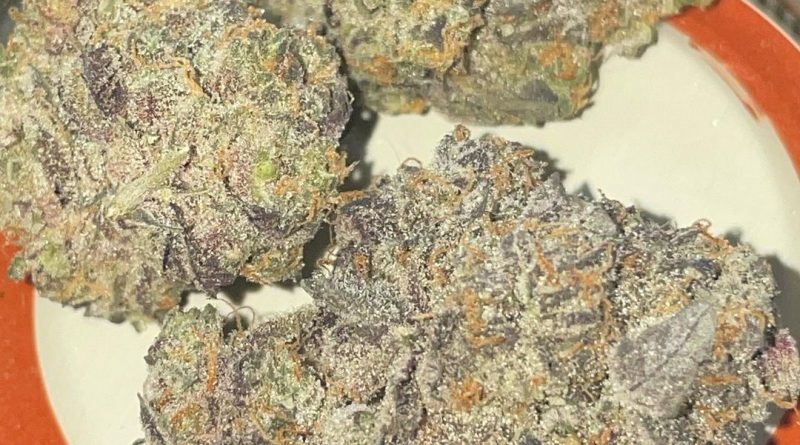 What’s up everyone? I hope all of you enjoyed your weekends and are fighting through the Monday madness. I have the perfect remedy to combat the craziness of the start of a new week and that is another review. Today I will be talking about the Apple Fritter from Gaia Farms who hails from York County, Maine. Personally, I have never heard of Gaia before trying this offering and I couldn’t find too much information besides from what I skimmed in their IG profile. From what I saw, I could really tell that this company takes pride in the flowers that they cultivate and craft. Additionally, their new logo caught my attention and really gave me those heavy Maine vibes as it depicted a black bear on the emblem. I feel like I have been striking gold in the Maine cannabis market recently so I had high hopes on what this Apple Fritter had in store. Let’s waste no more time and get into the facts.

When I was gifted the Apple Fritter, it was given to me in a small glass jar with a black twist-off lid. Nothing too out of the ordinary so not much detail to get into there. When I twisted off the lid to the jar, I was met with what I expected and that was a piney tart as well as a mix of must and sour. Personally, I faintly smelled green apples within the nose but, for the most part, the tartness is what really stood out. The buds themselves were on the larger size (some ranging from a 1.5-2g alone) and had some beauty them. Although some nugs were a little leafier than others, I couldn’t help but admire the even mix of light to dark green as well as purple hues that were mixed into the Apple Fritter’s overall structure. The trichrome coverage was phenomenal as well as the pistils which stood out through each part of the body.

The high that ensued was extremely balanced between both the mind and body provoking a strong feel of relaxation. This was no surprise as this is typically what Apple Fritter results in. Additionally, I did feel a bit of increased perception as well as a boost of energy after smoking the fritter. The main appeal I personally have towards this strain is that I could smoke it virtually whenever, enjoy it and not get boggled down. Whether it was a night in on the couch, going out with friends or even doing some physical activity this one never seemed to let me down. The only let down I personally felt about the high was the duration wasn’t more than an hour or so. Additionally, this did leave me the urge to smoke even more afterwards so I’m not too sure if that was a potency issue or something else. Nonetheless, the Apple Fritter did lead to a very positive and uplifting high that left me satisfied for the most part.

I don’t think it is going to take much convincing to get smokers to try this one. The cinnamon apple appeal from the nose down to the final cherry will hook in about any smoker who desires some flavor when lighting up. Especially those who tend to appeal to more sweet and sour strains this is sure to be an instant hit. The only smokers who may pass this one up are the “gas only” smokers but, that fresh scent out of the jar may end up changing some minds. Apart from the flavor, the uplifting and balanced high this cut of Apple Fritter provided will probably be a favorite around a lot of social and intermediate smokers. Given that the high is not too strong and overpowering, this will provide a suitable smoke amongst friends who are planning a night out or are staying in together. This is also an acceptable smoke for any adult experiencing depressive symptoms or any type of mood-related illness given the europhoric effects. Although Apple Fritter isn’t amongst my favorite strains it’s really hard to deny the even-keeled smoke that this provided as well as its potential to have attraction amongst a mass of different types of smokers.

Some leaves were a little more dried out than others, however, the overall texture off the bud was prickly and fairly fluffy but with a bit of density as well. This resulted to a very good yield upon breaking up the bud. Additionally, it wasn’t the type where you will have globs of bud stuck to the inside of your grinder. All in all, this filled out the joint nicely and I was eager to light this one up.

When I sparked the Apple Fritter in an organic RAW, I immediately was overtaken by a smoky sweet taste combined with a bit of mustiness. On the exhale, I received a distinct cinnamon apple taste that had a varied mix of musty and tart terps. At the beginning of the sesh, that cinnamon flavor was really dialed in and provided both a sweet and sour appeal to the cultivar. The pulls weren’t necessarily overpowering but there was no shortage of flavor to say the least. A little way in to the sesh, that flavor started to turn more tart and bitter. I was surprised this wasn’t as cheesy as some other Apple Fritter offerings I have had in the past, however, I think this amongst the most flavorful I have tried. The burn was a little quicker than I would have preferred and I would attribute this to some of those dried out leaves on some of the nugs I received. The Apple Fritter did burn a silky white ash although the res ring was not the heftiest I’ve ever seen. Overall, I think the terps throughout the sesh were very on point and I’d consider the smokability to have been pretty decent as well. 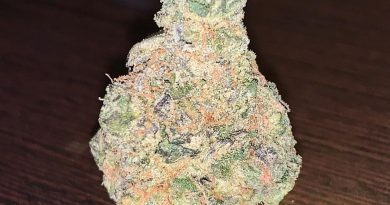 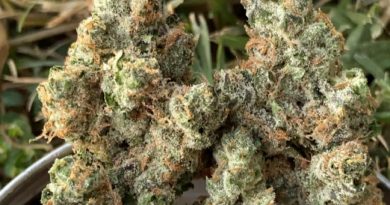 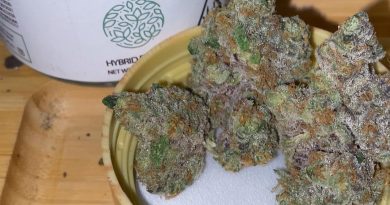