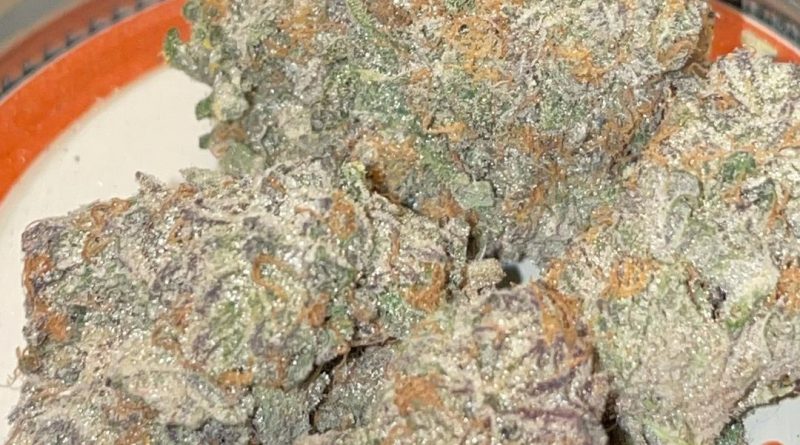 Hey what’s up everyone? Happy Monday and I hope everyone isn’t pulling their hair out already to start the New Years. I have an undisclosed review for the first one this year which was assisted by Dank Dabs. This one came from our northern neighbors in Maine by a cultivator who chose not be tagged so, out of respect, we will keep that out. Nonetheless, this was my first time trying some Mint Cream Cake and the contents of it looked pretty on point when gifted. Let’s waste no more time and get into the facts.

I was gifted the Mint Cream Cake in a small, glass mason jar with a white twist off lid. When I removed the lid, I was hit with heavy earth scents on the nose. I also received a faint smell of creamy vanilla notes buried in the mix of some must and pine. When I pulled these powdery, lime green nugs out of the bag I was left with a lot of scattered kief flakes . The nugs themselves were on the larger size (some with massive colas) and had a very considerable amount of trichrome coverage on them. In addition to this, there were some shades of lighter purple poking out as well as an overload of pistils stretched throughout the body. I know I have been reviewing a ton of Kush Mint crosses recently and this really had that appeal to me on the aesthetics. I would imagine the scattered purple hues would resemble the Ice Cream Cake parent within the lineage. The nugs were pretty dense yet a bit flaky so there was an overall good yield upon breaking this down. As I expected, the breakdown did result in a thousand kief particles as well. The dry pull on this one consisted of a sweet cream and diesel taste, making me anxious to find out what this smoke like.

Upon seshing the Mint Cream Cake, I felt like this was a perfect strain that reduced my anxiety, especially after some longer days at work last week. I was met with an overall calm throughout the high which led to a deep state of relaxation throughout the entire body. I also felt a mild case of butterflies within my chest as well as an increased perception. Additionally, I felt an overall mood change when lighting this up that cleared up any wrongdoing experienced throughout the day. Although the effects of this cultivar were on point, I thought it lacked in duration slightly as I was only high for about an hour. The come down a little tiring but nothing too crazy. All and all, the high from this was enjoyable but did fall below expectations just a little due to the duration of the of the overall high.

For the most part, I really felt the Mint Cream Cake was a decent cultivar that packed a ton of flavor on the smoke. Once dialed in more, I believe this particular cultivar could have a chance for increased potency on the smoke as well as a longer duration for the high it fed off. This is not to say people won’t find comfort in this. Overall, the cleanliness of the smoke was on point as well as the burn which will satisfied this white ash enthusiasts. I also feel like anyone who enjoys a relaxing and flavorful smoke during the daytime will find this cultivar to be worth trying. The effects were strong but I feel like more less experienced smokers could find that to be different and maybe more enjoyable than I did. I believe the overall effects I felt from the Mint Cream Cake would help anybody, like myself, who have increased anxiety or just need to wind down after a long day. However, this could be a relaxing day strain on a chill day where there isn’t much to do.

When I sparked the Mint Cream Cake in an Organic RAW, I was initially overtaken by the same flavors I had experienced on the dry pull. A rich layer of creamy diesel mixed in a bit of earthy and must. On the way out, the creamy taste experienced on the inhale enhanced, however; during exhale there was a distinct vanilla taste that followed through with more musty terps. This was packed with flavor although I didn’t really get any notes of mint just straight vanilla. This taste, to go along with the overall creaminess in flavor, became very prevalent about a quarter to half way through the sesh. I also got a bit of pastry taste in there that was oddly similar to the one I experienced with the Queensbridge Cannoli from Infamous Farms. The pulls were moderately gassy as I received a slight diesel taste mixed into the smorgasbords of dessert terps but more crisp than anything. The burn on this cultivar was a little quicker than usual resulting in a paper-mâché white ash with an terp drip around the perimeter that was absent. Personally, I believe the absence of the oil is probably the best explanation for the quick burn.

The flavor did remain strong down to the very last pulls which made the flavor arguably the biggest highlight of the smoke. I wouldn’t say this was the most potent smoke ever but it was very rich in flavor making it an enjoyable cultivar. 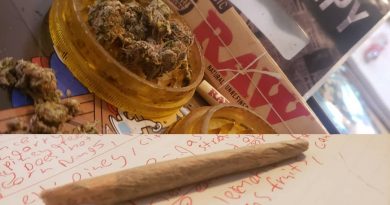 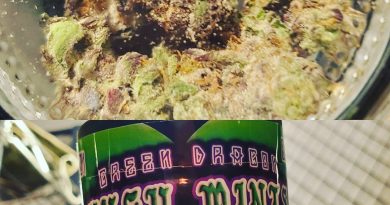