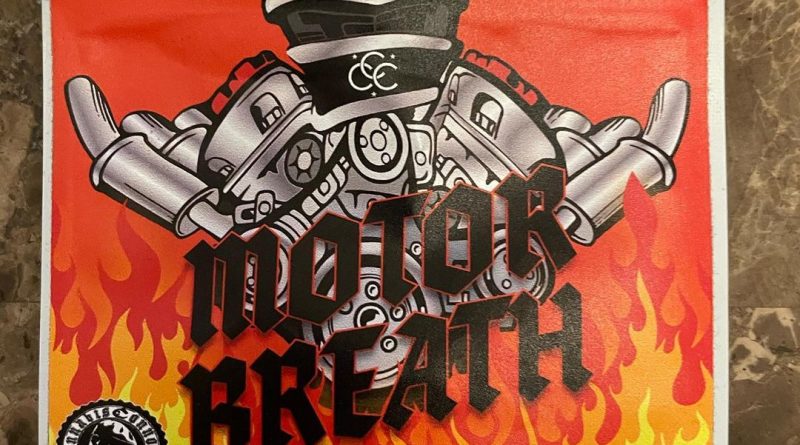 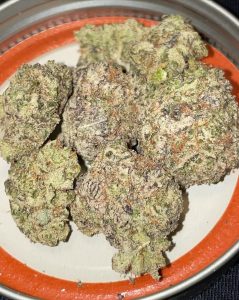 Hey what’s up everyone? As you know I’ve been a little bit busier than normal than later but I wanted to squeeze in a review for a returning guest. Cali Connection, other known as Cannabis Connissuers Club, was nice enough to stop by a couple weeks back after missing him at the High Tolerance event. After a few month hiatus, he was the one who reached out to me to go out to the event so I appreciate the invite. In return, I have a couple reviews I am going to get up for him and Infamous Farms. Today, I will be going over his offering of Motor Breath which features a cross between Chemdog and SFV OG. I was anticipating a gassy cultivar both between in the overall nose and smoke on this one that would potentially lead to some strong effects. Let’s waste no more time and get into the facts!

The Motor Breath came in standard, square Mylar bag which depicted a devil illustrated in the form a engine that sat on top a sea of flames. The colorway was a mix of orange and yellow which, in my opinion, formed a somewhat creative cover art. Upon opening up the bag, I received a skunky and meaty funk that bursted right out the second I opened it up. The smell reminded me a bit of GMO with a meatier, spicier twist. The buds consisted of a soft, dense texture yielding a mild leafiness to it. Each one was made up a a light green and whiteish colorway due to the impressive triche coverage the Motor Breath was made up of.

Once broken open, the buds gave off a fairly sticky texture leaving a kiefy substance behind on my fingertips, especially when breaking them down. The apparent gassiness that the nose on this cultivar honed was slightly offensive. I caught a slight whiff of onion as well as a musty diesel aroma that woke up the senses. The amount received upon breaking the buds up in the grinder was about average. When taking a dry pull of the joint, I acquired a musty sweet and sour taste with chem undertones.

When I sparked the Motor Breath up in an Organic RAW, the initial inhales comprised of a weird concoction of sweet pine and meaty terps that fed off a moderately gassy flavor. On the way out, the taste when letting the smoke out had a musty, cakey flavor to go along with sharp woodiness. Once a little ways into the sesh, the sweet taste received on the inhales became gassier and meatier. Inversely, on the exhales, the earthy taste I got complimenting the cakey, doughy flavor morphed into bitter citrus. While this cultivar had its fair share of flavor, I didn’t think it had the power I’ve experienced while smoking Motor Breath in the past. Despite that, the flavor on this particular offering did last until right around the finish of the joint making this a decent smoke. For the most part, each pull was a lot more smooth than pressuresome on the chest. The burn was on the joint was mildly uneven resulting in a bone-white ash accompanied by a micro-bubbling terp ring. Like I mentioned before, I felt like this cultivar had enough flavor to get by but I was expecting a better, all-around punch to it.

The medicinal effects first ensued towards the finish of the joint. Initially, I started to feel my mind wander a bit which followed by a smooth uptick in heartbeat. This wasn’t a racy high in the least but I did notice my body fighting between increased energy and relaxation. The effects moved in quickly as, within the next 20 minutes or so, a strong upper body paralysis captured me. I realized I was extra giggly as well as had an upbeat personality throughout the duration of the effects. At least that’s what my fiancé noticed of me while under the influence of the cultivar. Although the effects were desirable when present, I thought the duration was a bit weak as the high only the Motor Breath only lasted about an hour. That strong euphoric vibration that began at the beginning eventually took over the entire body, lingering even after the point where the effects weren’t noticeable anymore.

After having a chance to try out the Motor Breath offered by Cannabis Connissuers Club, I wholeheartedly believe experience was more run-of-the-mill than what the bag appeal had set the expectation for. While the nose was good, the nugs were aesthetically fresh, and the smoke was flavor this still lacked a degree of gassiness as well as strong medicinal effects. Not saying this wasn’t enjoyable because if you are one of those who enjoys a smooth smoke and has a preference for a spicy, diesel flavor than this cultivar will do you well. Although the effects didn’t last too long for my liking, I do believe that indica-leaning smokers will find comfort with them. Additionally, the uplifted effects I felt from this cultivar are sure to brighten up a rough day. Given the lack of distinctive power on the smoke, I really didn’t find trouble smoking this at any given point in the day. I didn’t think the Motor Breath was one of the best offerings I have ever received from Cali Connectin and Cannabis Connissuers Club, however, it did possess some likable features. It was good to see these guys back around again and I will have a review up on the Gary Bird within the next week or so. 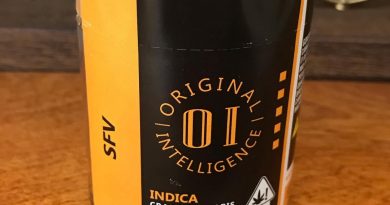 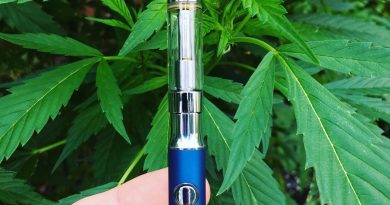 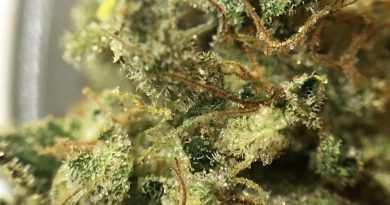