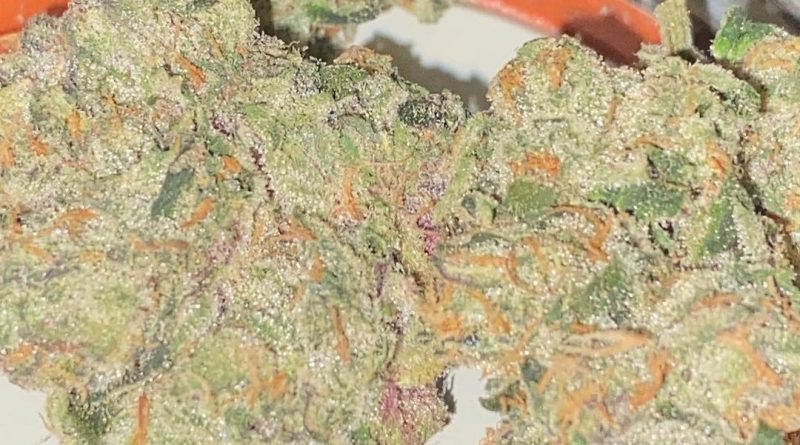 Hey what’s up everyone? We made it to hump day and I have another review for you all. Today I’m going to be going over another 1st for me which is none other than the Mylar OG from Boutique Smoke. When I learned about the genetics that this strain was crossed with the first thing that came to mind was: polar opposites. I was more than interested to find out what this would be like. Let’s waste no more time and get into the facts.

The Mylar OG came in the same wooden-jar suction glass jar the previous three offerings from Boutique were in. When I opened it up a familiar smell of earth and pine. However, as I drew closer to the nug, the scent became gassier with a touch of smokiness and sweetness to it. This certainly had a bizarre nose to it but in a good way. The nugs were lanky boulders with a perfect mix of purple and dark green. The pistils along with the crystals were over-abundant an and really had a professional look on this strain giving it a highly aesthetic appeal. One thing that I took exception to that caught my eye was how dark green the stems were on each nug and also how pointy the calyx were which made the crystals stand out even more. The texture of the buds themselves certainly gained the characteristics of its Meat Breath parent as they were dense as a rock but equally sticky. They did break up pretty easily I must say and the yield on this was beyond exceptional compared to what you normally get for sticky weed. This filled the joint out nicely.

When I sparked the Mylar OG in organic RAW, the first impression on the inhale was very earthy and gassy (almost a diesel taste). I also noted a light hint of citrus and tanginess to go along there. On the way out the joint exhibited terps of must, smokiness, and floral. This was accompanied by a mix of tart sweetness. The terp profile was amazing on this and seemed to hit almost every note in the book (even the Runtz parent which was the most challenging to notice). The change in flavor was very noticeable as the taste initially started off smoky then went into more of a citrus taste especially during inhalation. About halfway through the citrus became more of a diesel taste which ended in a lemon finish. This really took me by surprise the most and I like to think the Mylar Og had a “chameleon effect.” I feel like the heavy hitting diesel notes of the Meat Breath parent was the most prevalent amongst these changes. The burn was what you expect and resulted in a thick white ash and healthy res ring. I was impressed by both the consistency of the smoke as well as how long it lasted. Overall, I think the smokability of the Mylar was the main highlight of the sesh and met expectations to say the least.

The high the that Mylar OG fed off was pleasant. About 15-20 minutes in I felt my self heavily medicated and extra spacey. There was a heavy euphoric feeling that could be felt throughout the body but especially in my knee joints and legs. This created almost too much of a “couch lock” feel and I felt like I had more difficulty getting myself out of a slouch position than normal. I also built up a pretty good appetite but managed to get around to it after the high as I was glued from this. I did noticed an increase in happiness and overall mood after smoking the Mylar OG which really came in handy after some long days. One downside was that it was a quick lasting high that wore off about an hour to hour n half after finishing the joint. I was pleased with the overall quality of the high although, personally, I feel like it wasn’t 100% ideal as I felt like this made me a little too lazy for comfort.

I think my recommendation for this is pretty easy. I would reserve the Mylar OG for experienced-level smokers who have a knack for chasing crippling, hard-hitting highs that have an indica-dominant effect on the body. This one I feel like would be beneficial on the medical side as I believe it would appeal to masses. From those who suffer from appetite loss, manic depressive states along with chronic joint pain, arthritis and as a serious as CP. For any intermediate or even veteran level smokers looking to relax and take the night off then this would certainly be right up your alley. I think the quality on some of these offerings by Boutique so far have really shown a level of quality and uniqueness. I am happy to announce that he blessed me with some Hectane and Strawpicana recently for review so we should have those up sometime in the near future. 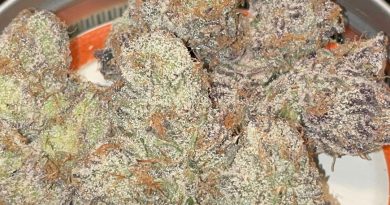 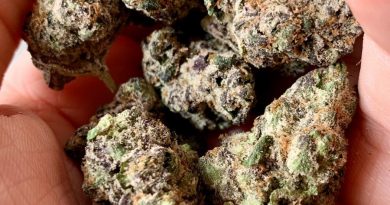