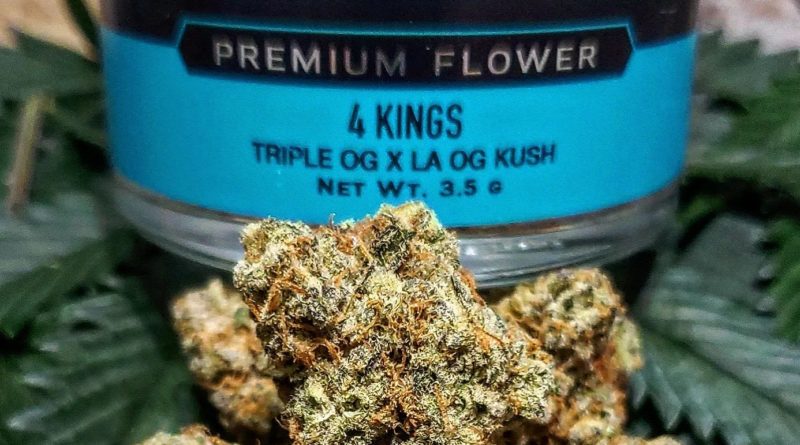 Today we bring on some Cannabis royalty with Revolution’s(There IG is down at the moment)4 Kings. Their hierarchy is at the top of the Illinois Cannabis community so when I saw one from them that has been around for awhile that I hadn’t had a chance to review I decided to jump on it. Who doesn’t like a good OG especially when Revolution combines it with the breeding of @exoticgenetix_not_a_fake. Mike took his Triple OG(Constantine*Triangle Kush*Master Yoda) and crossed it with SoCal’s version of OG known as LA OG Kush(Chemdawg*Lemon Thai*Hindu Kush) to create a 80/20 Indica dominant banger.

A nice five nug eighth of wintergreen to sage green with burnt orange pistils and sandy gold trichomes. Unfortunately this jar was over 8 months old so they were dusty to say the least. Some machine trimmed holes were apparent as well. 20/25

Very little nose out the jar with musty basement and some pine forest faintly noticeable. Breaking up will bring up walking thru the pine forest with a lingering skunk in the distance. Slight citrus rind on the backend but that stale vegetal smell of old weed is dominant thruout.16/25

Expect a grassy lemon kush that still retains quite a bit of good flavor for being so old. A peppery kick on the backend gives a smack to the lungs and pushes thru with some woodsy campfire notes. The joint dry pull has a earthy musty pine OG with clean white ash with even a little resin ring despite its age. 20/25

Great headband high that wraps around your head with good vibes. Although for a Indica I thought it did lack body buzz. Not sure if it was from cultivation or from the old shelf life but it did lack length of high too. Overall a classic OG experience but one that can leave you wanting more and lacking the necessary needs I look for in my bud. 19/25 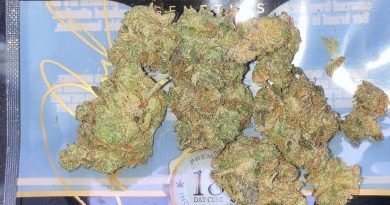 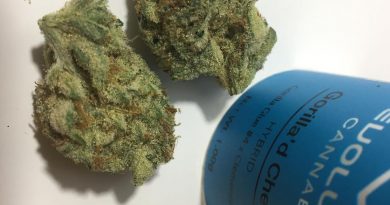 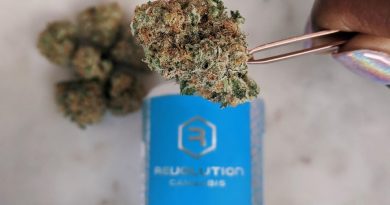