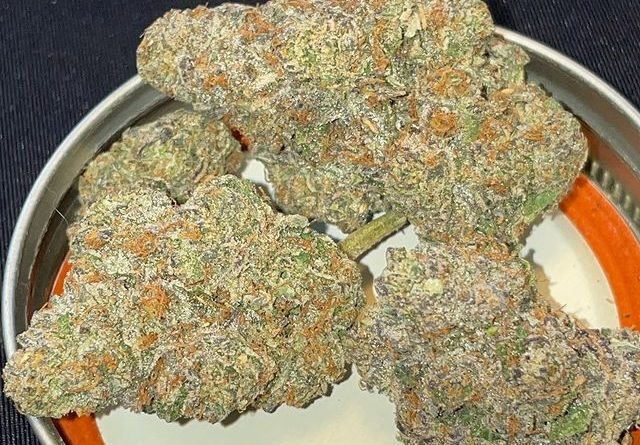 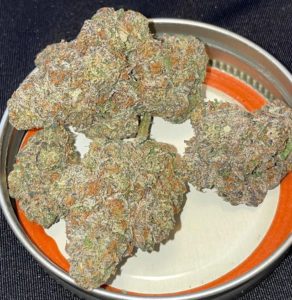 Hey what’s up everyone? Life has slowed down the reviews as of late but I wanted to get this one out before the week’s end. This is some Sherb Cake received from the homie Frew Tree just before I went on vacation. Due to the enjoyment I’ve had reviewing this guys stuff over the past year I figured a review on some of his latest cultivation was inevitable. If you do not know who Frew Tree is I would kindly encourage you to revisit one of my earlier reviews on his material. Originally bred by Seed Junky, Sherb Cake featured a cross between Ice Cream Cake and Sunset Sherb bx1. This particular pheno came about as a result of the work from Chromatic Cultivation. This isn’t my first rodeo with this cultivar and, based on past experiences, this cultivar has a knack to throw off fruity fuel terps with a smooth layer of gassiness if done properly. Naturally, given Frew Tree’s talent I was pretty confident beforehand that this would fit the bill. Let’s waste no more time and get into the facts!

When I picked up the Sherb Cake it was presented to my in a traditional ziplock baggie with the cultivars name indicated by a Sharpie on front. The first impression of the nose was similar to that of unraveling a pack of Zebra Gum. While this cultivar had an evident fuel aroma seeping out of the bag, I also couldn’t help but notice those notes of fruit, dough, and cake that followed behind it. Personally, this seemed like almost an even 50/50 display of both the Ice Cream Cake and Sun Sherb within the lineage.

The quarter consisted of a variety from smaller to large-sized nugs. Heavy in weight and dense in structure, this cultivar featured a surface that was nearly trimmed bald although it did retain a lot of triches and that good stuff. The appearance of the nugs were subpar when looking into the baggie, however, under the light and mag jar they definitely glowed. This was showcased through the lighter green and violet hues the Sherb Cake boasted with a moderate drip of triches placed on top. The pistil count was spotty but still very intact in certain areas even given the low trim. Bristly when in hand as well as having a fair amount of stickiness to it, this round of Sherb Cake had marvelous texture. After breaking into the buds they exhibited pastry shell/cannoli terp as the doughy and fuel aromas started to intensify. Even though I didn’t struggle to break the buds apart, I personally preferred using a grinder to gain the most exponential yield possible. Once broken down, I got a mix of skunky and pine aromas to go with a distinct smell of sherbet. The dry pull on the joint was almost identical to the nose as I let in a heavy mixture of both fuel and doughy terps consisting of a sherbet tasting backend.

When I sparked the Sherb Cake in an Element paper, the initial inhales brought in a balanced mix of both fruit (specifically strawberries and cherries) and pine. This cultivar presented an extremely good burn from the start bringing on pulls that weren’t exactly for the weak of heart. On the way out, I managed to retain most of the flavor felt on the inhale (especially the fruity and gas terps) giving the smoke a smooth, but sharp, back end. It was only about a quarter of the way in when I started to notice a Juicy Fruit like flavor expelling off the exhale. Directly proceeding this, I honed in on amplification of fuel terps through the inhale which included a pick up of doughy and skunky flavors.

The first half of the sesh was on par with expectations as each pull brought about that even combination of fuel and fruit that included subtle pastry notes. The burn remained strong and consistent on the joint although this round ensued with an ash that had a salt and pepper complexion. Despite this, a hefty, black oil ring formed around the perimeter of the joint complimenting the flavor being throw from the Sherb Cake. Moving past the halfway point in the sesh is when the fruity terps from earlier began to turn sour, almost bitter tasting. Although I still pulled in a heavy amount of sherb and stale fruit at this point, the oily backend resulted in a more lip-puckering taste. This made some pulls harsher than others despite the sweet, citrus back end I typically received on the exhale. Apart from this, I did experience too many terp changes towards the end of the sesh. While I didn’t think this was the most memorable smoking experience from Frew Tree’s garden, I still thought this possessed enough flavor and potency to get the job done.

The onset of medicinal effects brought about by the Sherb Cake started with a slow burst of euphoria descending within my brain that unleashed a steady mix of perceptiveness and mind wandering. The first 15-20 minutes I almost felt as if the effects were delayed but did not want to do. Feeling moderately relaxed between my muscle and joints within my upper body, I concurrently experienced an increase of energy as well. This brought on an equilibrium of alertness and carelessness. Over the course of the next half hour, I felt at ease with myself, becoming increasing carefree. My mood was all-around upbeat, positive, and attentive to others around me. Regardless of the tolerance break, this seemed to be more of a moderate-level high. As a result, I found this cultivar to be supplemental when having company over or before indulging in a night out.

There were periodic moments of mind wandering into outer space but, for the most part, the Sherb Cake was a jovial high. Additionally, I experienced a slight increase in hunger close to an hour proceeding the onset of effects. As the effects wore off, I felt almost as if I was levitating given the smooth comedown this cultivar provided. In total, the high from the Sherb cake lasted around an hour and half (close to two hours with the tolerance break). Similar to how this smoked, the medicinal effects were nice but nothing I haven’t seen before. All in all, I thought this was a blissful high that spanned out averagely.

After having a chance to try the Sherb Cake by Frew Tree I thought it was solid but not as impressionable as some the previous offerings I’ve received from him. Even after a two week tolerance break I didn’t think this hit me as much as anticipated. Nonetheless, the appearance and nose on this one will garner a lot of interest, especially from those who enjoy those fruity fuel type cultivars. In addition to that, the terp profile and burn on that the Sherb Cake provided served as the main attraction. While it packed enough gas to appeal to the smokers wanting to take on some pressure I also felt this would probably easily favor those who terp chase. Particular those who enjoy an even mix of gas, fruit and sherb will be in a treat with this one. While I didn’t think the medicinal effects lasted exceptionally long, they had no problem getting me out of the worst of moods. I also believe that use of this cultivar can be suited for either day or night. The Sherb Cake did feature some euphoric traits; however, the main thing that stuck out to me were the uplifted spirits I received throughout the duration of medicinal effects. I wanted to thank Frew Tree, as always, for putting some heat in my hands. We will see more from him to come soon than later. 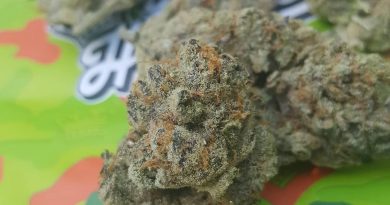 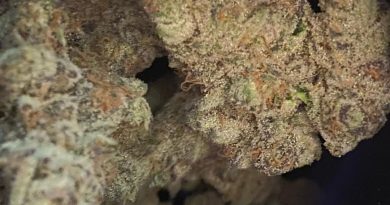