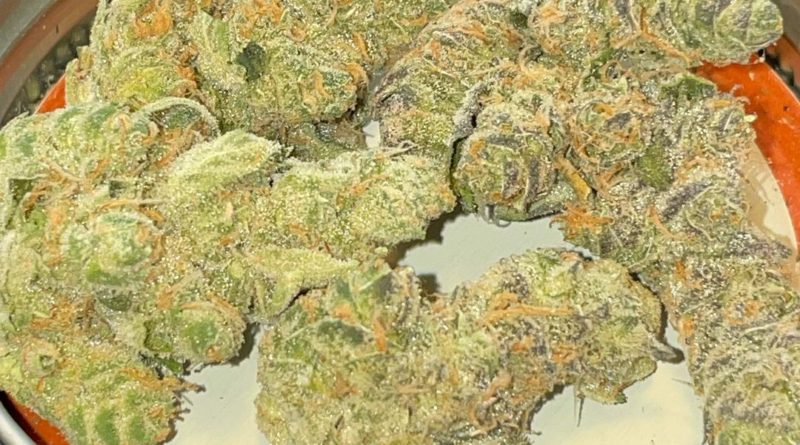 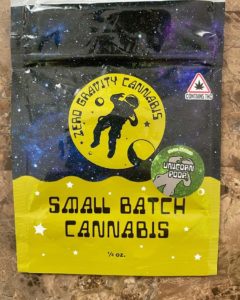 Hey what’s up everyone? I’ve had a little more time to dedicate on reviews lately so should have more content coming up out of the pipeline barring any unforeseen requests. Today, I will be debuting someone I have had a chance to try in my past experiences but have not formally had the chance to review yet. Actually, if we’re being honest, I’ve had the chance to try these guys a handful of time over the past couple years. Originating from Southern Maine, Zero Gravity Cannabis has become one of the more prominent brands in the local area, living and dying by the phrase “fire in, fire out.” Known for creating buzz behind sourcing cutting-edge genetics as well as their putting their stamp on certain cultivars including MAC1, Cherry Ghostnade, Vanilla Frosting, amongst many others. I did notice from their website that a large number of these cultivars were original bred by Exotix Genetics although there is a good mix of reputable breeders in that stable. They are also known for their own cultivar, such as the Devil’s Toast. For this review I will be diving in their Unicorn Poop which features a cross between GMO and Sophisticated Lady. Having the chance to try this prior I know first-hand the power this strain contains when dialed in properly. Let’s waste no more time and get into the facts.

The Unicorn Poop was received in a standard, rectangular shaped direct-to-print Mylar bag. Personally, I thought the presentation was very simple, straightforward and somewhat professional. Featuring a navy blue sky with spotted stars over a bed of gold (presumably making up the Earth’s outer layer) make up the design on the bag. Sporting their trademark logo with their branded mascot, Grav Guy, within there isn’t much else to point out apart from the back laying out their slogan, “we have high standards.” All in all, nice touch with the packaging.

While at first it was difficult for me to form my thoughts once the effects hit, after some time, I did manage to collect myself. Around a half hour in is when I started to feel pain relief within my joints, specifically within my back, shoulder, and neck regions. As noted on the packaging, this was a 50/50 hybrid and felt exactly like that. After managing to regain my perceptiveness, I found the effects from the Unicorn Poop to be well-rounded as well as peaceful. I enjoyed this spaced-out, by myself, with minimal distractions. Although this worked well in the evening, I think this was a great Saturday/Sunday morning experience that cleared the cobwebs as well as punch me in the face a little. I remember a couple times making my own lumberjack breakfast at home while under the spell of this cultivars effects. When it was all said and done the total duration of effects last between the hour and half to two hour frame. Ultimatley, the medicinal effects from the Unicorn Poop reminded me of a sprint due to the fact the effects came ripping out of the gates and eventually mellowed out, leading to a personally enjoyable experience.

Although this is not my first time trying the Unicorn Poop from Zero Gravity Cannabis, I think this was well worth trying for my third or fourth time (I think). Coming out of the bag, the nugs were stellar possessing a clean appearance. Despite being a couple nugs being crunchy, the “Poop” had pretty favorable texture too. This cultivar is one of those that will 1000% subjectively appeal to the gas smokers. Not to say candy smokers won’t like this but, quite frankly, you know what you’re getting as soon as this comes out of the bag. When it comes to the medicinal effects this one possesses, this has potential to be a fan favorite for a lot of people as it covers a plethora of different preferences. For medicinal consumers, I think this will particularly work well for those experiencing depression, anger, muscle aches, fatigue and a variety of other ailments. I wanted to thank the close friend who got this sample of Unicorn Poop to try. I will be lookout for more to come from Zero Gravity.

When I sparked the Unicorn Poop in an Organic RAW, the initial inhales brought about a gassiness that was not for the weak of heart. Lingering diesel overtones comprised of thick floral terps set the stage, letting me know firsthand what type of punch this would pack. Those diesel and chem notes started to intertwine with each other around 1/4 of the way through, especially through most exhales, leaving a dry, sticky feel on my tongue. I didn’t notice anything out of the ordinary with this cultivars profile. If anything, the Unicorn Poop dialed in on some classic terps, especially the sour Chem and diesel notes that seem to hit me through each pull. Around the 1/2 way mark into the sesh is when a combination of skunk and rubbery terps became prevalent as the mustiness felt through the exhales around this time left an odor on my breath that reminded me of a eating a clove of garlic with karosene-infused cotton balls. The floral notes felt early on heightened through this period as well. I also was impressed by the distinct diesel odor that filled the air in similar way trash does on a hot summer day. Moving along, there wasn’t really too much change in flavor from there on out as the joint burn a very consistent pace. The thick pulls ultimately led to me receiving a white ash with lighter grey spots within. I was underwhelmed by the seemingly non-existent terp ring although, given the terps, I was surprised she didn’t drip more. Overall, I can’t say that this cultivar possessed the most cutting-edge qualities I’ve ever tasted, however, this was uniquely gassy. Although I was expecting a little more flavor towards the tail end of the joint there’s no denying that the way this smoked was thorough.

The onset of medicinal effects provided from the Unicorn Poop instantly sent vibrations running through my head. To begin, I felt a sudden raciness which formed slight paranoia even causing small sweat beads to form on my forehead. The first 15-20 minutes of the high was intense and, to be honest, my brains felt a bit scrambled.

While proceeding to take out the Unicorn out of the bag, about 3-4 nugs made up the eighth with one of the nugs holding about half the total net weight itself. Upon taking the buds out of the bag, each one consisted of lanky, spear-like colas with a vibrant lime green colorway that shined when viewed from within. I wasn’t hit with anything more than dull, earthy aromas with a slight bit of gas when doing so. Holding them closer to my nose I caught a glimpse at the violet spots that the overall structured held which, when viewed under the microscope, simply dazzled. This is not to ignore that each one was covered by a bed of trichromes along with eloquent orange pistils in abundance. Possessing a nice trim to an equally balance structure I don’t think the photos did the justice that the in person form of this cultivar took. When saying equally balanced in structure this referred to the combination of stickiness and crispy snap this provided when breaking one of the nugs apart . In the process, I became fixated on a rather offensive odor made up of skunk and burnt rubber. Personally, I found breaking apart the buds effortless and, judging from past experiences, this bud may have been sitting just a little longer than prior offerings I’ve received. Nonetheless, the buds were more than valid and breaking them down yielded a decent fluffy grind. At this point I honed in on the GMO-like funk this cultivar exhibited whilst, at the same time, throwing off spicy burnt rubber and skunky sour aromas. As I went to take a dry pull from the joint, I received notes of rancid sour milk paired with gassy under layers of skunk-like flower petals. 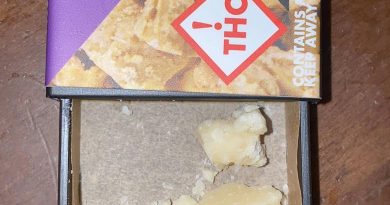 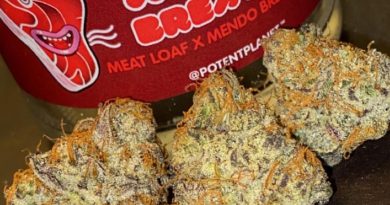 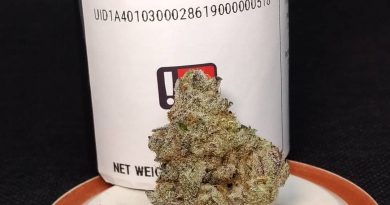