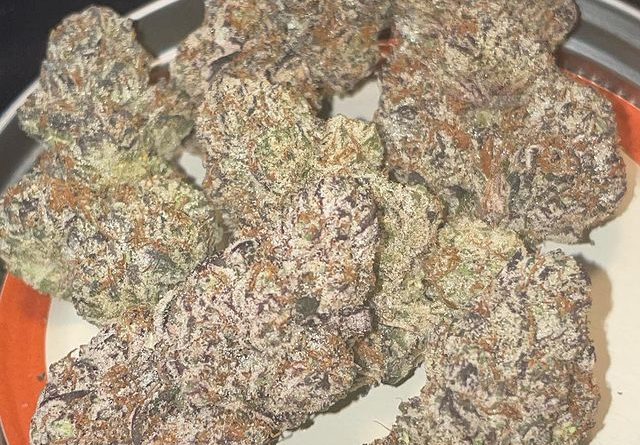 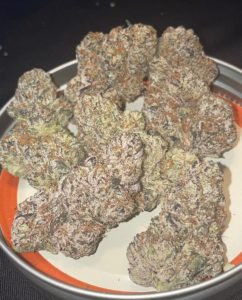 Hey what’s up everyone? We are inching closer and closer to Turkey Day but, before we stuff our faces, I have another review for you all to indulge in. This one has been in the vault for over a month now and, rather now than never, figured it would be a better time to get this one out to the public. I received this batch of White Cherry Z when I was seeking some headstash upon coming from vacation a couple months back. Along with the Bubblegum Gelato, Bad Larry Buds teased me with some of this White Cherry Z which, I’ll be honest, I never heard of prior to this occasion. He informed me that this cultivar was grown by an undisclosed friend of his locally and includes a cross between Sunset Sherb, Ice Cream Cake and Rainbow Beltz. After hearing the cultviar’s name I set my hopes high that the Z on this one was going to be in all caps. Let’s waste no more time and get into the facts!

When Bad Larry gave me the White Cherry Z, it was presented within a plastic sandwich bag so there isn’t much detail to give regarding the packaging on this one. As I proceeded to open up the bag containing this cultivar, a mix of sweet floral notes with moist vanilla poundcake graced my nose. Additionally, I was able to spot a thick aroma of carbonated cherries and oranges beneath all the other goodness. Although I personally don’t think the photos I took do the appearance of this cultivar any justice, I could see the trichomes poking out of the bag looking like the sugar on top of Sour Skittles when I first got it. Once I took a few nugs out of the bag I could see firsthand that the appearance was more ICC dominant than anything.

Each one had a hollowly dense, bristly structure that contained a smooth machine-like trim job. An even mix of dark and lighter purple colors matched with some greener ones that laid under the thick trichrome coverage of this cultivar made the appearance even more enticing to the consumer. Breaking into one wasn’t the struggle I thought it would be as the interior held minimal goo and a softer breakdown. At this point, the smell of sweet cherries and fuel intensified that included a soft linen smell on the back end. The White Cherry Z was a lot more manageable breaking down by hand than I had imagined and actually gave me a better yield than that when I chose to use a grinder. When I went to take a dry I was provided with a taste of floral and sweet Cherry linen that exploding with Z that gave me high expectations for a terpy smoke.

When I sparked the White Cherry Z in an Element Paper, the initial inhales contained a balance of sweet and tangy notes of cherries and other citrus flavors. I also noticed a mild taste of lavender present when taking in the first handful of pulls. On the way out, I was met with an even consistency of sour candy terps that threw off a good amount of floral terps giving each exhale a flare. About a quarter of the way in is when I discovered that this taste similar to when you take a red and green jolly rancher when mixing them together. For the most part, the pulls early on packed a decent punch. Getting closer towards the halfway point there was a sweet taste of cinnamon starting to take off on the inhale. It was at this moment that I started to hone in on notes of vanilla cake and z terps. The exhales began to show a creamier, candy-styled side to them leaving a pungent taste of Cherry shortbread on my tongue.

The burn this cultivar resulted in was ok but, periodically, the joint would become caked up with a nice resin block. Ultimately, it burned to a fair-colored grey ash with a moderate terp ring to support. Moving along into the later stages of the sesh, some hits revealed fuel terps that borderline taste like butane. Personally, I felt like a lot of the flavor had died out in the second half. The taste of sour cherries that I felt earlier on started to return capping the sesh off with a rather bitter taste. I thought this one ran out of gas later on and, in some cases, I was forced to extinguish the joint early because of how much it tended to res up. All in all, I did like the way the White Cherry Z started out hitting me with moderate streaks of gassiness while packing a considerable amount of flavor. However, the ending was a little harsher than expected, ultimately, deducting some points from the total experience.

The onset of medicinal effects that were provided from the White Cherry Z stalled a little bit within the first 10-15 minutes after the sesh. A minor case of butterflies was locked in my chest as, for the most part, I became in tuned with my surroundings. Over time, I began to develop a tendency to ramble obnoxiously to my fiancé. This cultivar paired well with certain social situations as the first 30 minutes in I was in my zone feeling energetic. The one issue I did find while under the influence of this cultivar was that I had a habit of stumbling over my words at time from going to fast. During the course of the next half an hour there was a mild melting sensation that took over my inner loins. The strength of the medicinal effects provided didn’t blow me away at this point but did enough to make me cozy. The relief experienced was exceptional especially within my neck and back area. Because of this, I found myself blazing this one frequently before men’s league ball games.

In addition to presenting advantageous social qualities, this cultivar seemed to always lift my spirit even on though days it was tougher to digest my emotions. Although I thought the characteristics of the medicinal effects from this cultivar were likable I wouldn’t say that lasted too long over an hour. In some cases, I was left with the urge to roll up again after smoking this because I didn’t feel like I was high enough. Nonetheless, I would say the overall the effects from the White Cherry Z were hit or miss based off of potency and duration.

After having a chance to try out the White Cherry Z that was given to me by Bad Larry Buds I thought it was ok but not as noteworthy as some of the past offerings I’ve received from him. This one started in the right direction with an above average appearance that will be sure to appeal to those who have a knack for purp. To add to that, the nose that was provided from this cultivar was sweet and savory. There are no gimmicks either in the correlation between the name and nose. This one had distinct notes of both Cherry and Z (along with a mix other notable fruity smells) that made my nostrils dance. When it came to the smoke and effects, however, this is where this cultivar showed varying results. For instance, the smoke possessed a good terp profile and had instances where it the hits were pressuresome although the burn tended to lack towards the end of the sesh in most cases. In addition, some pulls later on we’re met with less terp appeal than others. The effects, on the other hand, weren’t as potent as they were desirable. I thought this served as an ideal daytime high that worked particularly well for social gatherings. I do think this will serve particularly well to those who struggle with depression and anger amongst many various other mood-related illness given the boost in spirit this cultivar created. Despite the medicinal effects not lasting as long as I anticipated, I do think this will be an undeniable fit for those who burn less frequently. I want give a shout out to Bad Larry for getting this in my hands to review. It’s inevitable that I should have more content from him soon again. 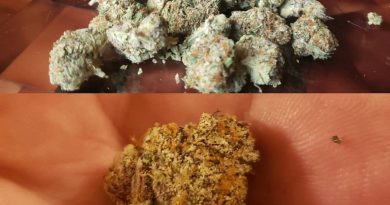 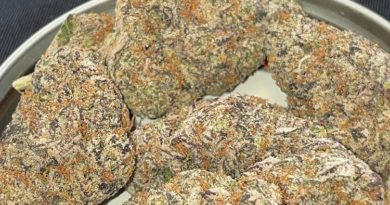 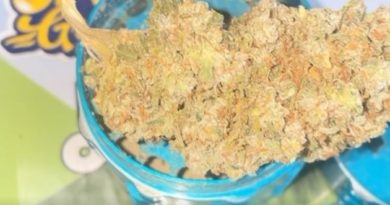