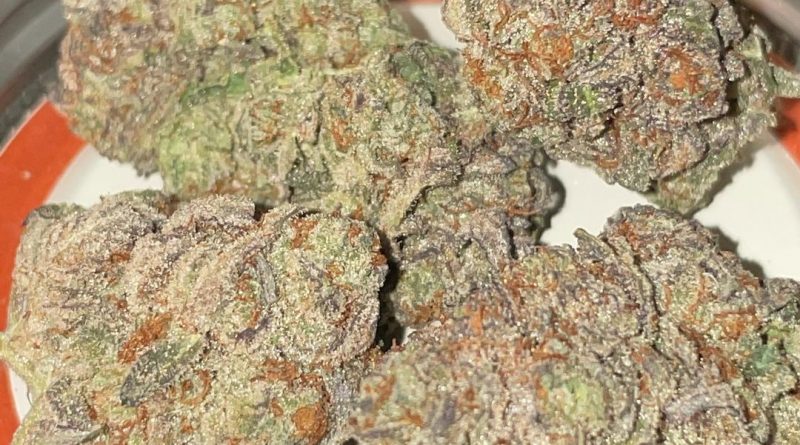 Hey what’s up everyone? It’s the Tuesday before Christmas and I have a my first review of the Holiday week for you all. Today I will be diving into another offering by Jewswhoinfuse and, although I consider him to be known for those gassier, old school-strains that he’s perfecting, this one is more on the terpier side. The Humble Pie he gifted me with, which is a cross between Cherry Pie and Grampa’s Breath, was nothing short of flavor and potency. I have been impressed with the first two offerings I have received from him so I was interested to see what this would be like. Let’s waste no more time and get into the facts.

Similar to the Kush Mints, the Humble pie also came in a small Ball glass mason jar with a standard, black twist off lid. When I removed the lid, the overall nose was strong, gassy, and citrusy as ever. A pungent odor of sour citrus pine with a touch of floral gassiness dominated the smell profile on the Humble Pie. Aesthetically, this was on point and made up of an equal mix of lighter and darker green hues throughout the body structure. Mixed into that, were red and purple hues to go along with dark orange pistils giving it an overall complex but pleasing look. Additionally, the trichrome coverage on this was solid and was the icing on the cake for a beautiful look. In general, the nugs were medium-sized and were extremely sticky. The 2-turn method was necessary upon breaking this up in the grinder. Once broken up, the citrus sour smell out I whiffed out of the jar intensified and I feel like I could sense sort of a tart cherry smell seeping from it. Although the bud was sticky it did break up pretty well if you used the method above. The thicker chunks of broken down bud filled up the joint nicely and I could already tell this had the makings for a slow burn.

I received, for the most part, strong sedative effects after having a sesh with the Humble Pie. Not to be too cliche, but the vibe off of this offering was stay in the house and don’t come out. I suddenly was consumed by an all-body euphoria not to mention my shoes felt like they were glued to cement blocks. Not only were the effects from this relatively strong they were also pretty lengthy in duration. The overall buzz from this last about an hour and half to around two hours so this worked perfectly for a late night sesh on the couch before bed. Additionally, I felt like the soothing effects from the Humble pie were giving me a full back and neck message so really didn’t have any complaints. I normally don’t like overbearing highs, however, it was hard not to find comfort in the deep relaxed state this put me in. The come down was pretty tiring as one could imagine but this certainly was an indica-lover’s dream come true.

Although I feel like this smoke was on the heavier side, I still believe a lot of smokers out there would find enjoyment out of this offering. For starters, anyone who likes a rich, and complex smell/terp profile will be in for a treat with this. Additionally, those smokers who are in search for a strong couch-lock offering would definitely want to give this one a try. The sedative effects on this were up there with some of the best I’ve tried in the last few months or so. Any one experiencing any sleeping disorder, muscle distrophy, joint pains, etc. will be in luck with this. I believe this is a strain that would have a lot of benefits on the patient side. Again, another strong offering by Jewswhoinfuse on this one. I should have one more to go of his up here very shortly so please stay tuned.

When I sparked up the Humble Pie in an Organic RAW, my expectations were met with a heavy citrus and diesel taste with a bit of pine. There was a distinct sour to this and, on the way out, the finish had an over abundance of different terps. The highlight was a musty diesel taste that was joined by a sweet and spicy zest. The sweetness was more faint than anything but took a little edge off of the gassiness. The overall flavor on the smoke was terpy as ever and, circling back to those citrus terps, I felt myself pulling lemon and cherry. Way more citrusy than what you find on the LCGs but this created extremely sour and gassy pulls. This, along with the gassiness, led to some moderate coughing and a bit of build up in the throat. The burn was very consistent, however; it did draw a bit of inconsistent ash. During some stages it was lighter and darker during others. Due to the oily nature of this bud when lit I did receive a huge res ring. All in all, the Humble Pie pulled a ton of flavor and, despite a consistent white ash, the smokability on this was very solid for the most part. 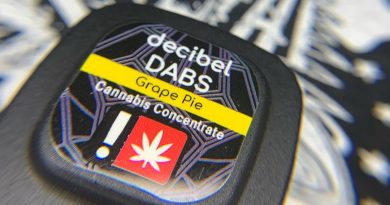 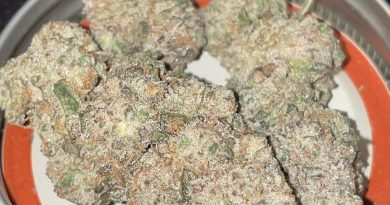