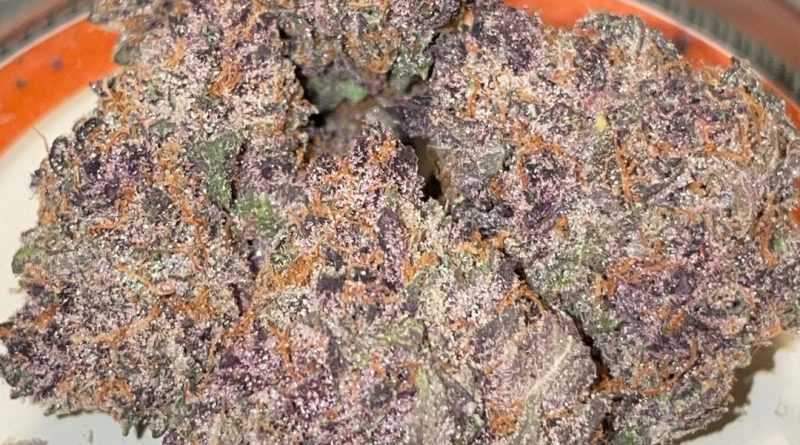 Hey what’s up everyone?! It’s been a minute and it’s been a crazy week but I am finally back with another review. By the way, Happy New Years Eve to everyone! Personally, I’m welcoming 2022 with open arms and hope that we can continue to take this review brand and page to new heights. Before then, I have one last review to round out 2021 which features Tropicana Cherry by Green Trap Cannabis. Similar to Lone Tree who I featured last week, I couldn’t find a whole lot of info on Green Trap when I did some digging on them. I saw some praise on Reddit for a couple of their strains including “The MAC” and “Wedding Cake” so you know I was excited to see what their Tropicana Cherry had to offer. Let’s waste no more time and get into the facts.

I won’t get into too much detail on the packaging since this was gifted to me in a small glass jar with a standard black lid. When I twisted off the lid, I felt like I stuffed my nose in the little round hole that comes on a box of Tropicana OJ. The nose on did not make me question the name of the bud what so ever. I also received scents of sour and pine within the nose that made the citrus smell all the more pungent.

I thought the high was decent but not as potent as I expected it to be. I was left with a mild dose of euphoria primarily in the neck and shoulder area. On top of that, the high from the Tropicana Cherry resulted in an increased heartbeat as well as overall energetic feel. This wasn’t anything overwhelming but got the job done. My biggest disappointment about the high was the duration. I seshed an eighth of this between 4 different occasions and didn’t feel that upbeat sense of euphoria for more than 30 to 45 minutes. There was a bit of bagginess that built up behind my eyes so I knew that the high existed. However, I felt myself coming to clarity a lot more quickly than expected. Additionally, I felt a come down within the same duration mentioned above that left me a bit weary with sort of a weird feeling in my body. This is not to say this was the least enjoyable high I’ve ever experienced but I was definitely disappointed considering how good the smoke was.

In my opinion, this was a very tasty smoke in which the citrus terps were completely dialed in. Any smoker who enjoys a citrus, fruity, or a strain that packs a lot of flavor in general will have to look no further. Despite being a little disappointed by the high, I do think that this offering would appeal to Sativa-leaning smokers given the upbeat vibe it fed off. Additionally, I feel like this would be a perfect smoke for more beginning to intermediate level smokers who want to keep their perception fully intact after the sesh. Apart from the effects, I feel like the overall aesthetics on this were very on point and I thought the cleanliness of the smoke matched that. Apart from the let down on the high, I did think this was a strong first offering from Green Trap Cannabis and I’m happy to announce I’ll be doing a follow up review featuring them which I should have up tomorrow. Happy News Years everyone!

The nugs were fairly large-sized and completely purped out with solid trichrome coverage. There were small shades of light green mixed in with a plethora of fair-colored orange pistols that were meshed in with the overall body. The texture was fluffy and some buds were a little leafier than others. Also, it was a little more dry than I expected so I decided to break up by hand. This actually broke up well between the fingers. During this, the bud was quite sticky leaving some kief and residue between the fingers requiring me to wash my hands afterwards. The bud still had that Tropicana-dominant appeal upon being broken down. To add to that, the yield upon break up was very solid. This filled the joint up nicely and I was ready to spark up.

When I sparked up the Tropicana Cherry in an Organic Raw, I was hit hard with a ton of citrus and tangy terps. This was accompanied with bit of earthiness, tart and a touch of sour. The citrus punch that this one packed was potent. On the way out, I received a heavy dose of must to go along with those powerful citrus terps that were retained. Personally, I felt like there was a lot more flavors being pulled throughout the exhale as opposed to the inhale. I caught a bit of spiciness on the inhale about half of the way in. However, for the most part the that citrus tanginess flavor remained consistent throughout the sesh. The Tropicana Cherry drew a light grey to white ash and formed a beautiful terp res drip around the brim of a beautiful cherry. The burn on this was extremely consistent with each inhale drawing more in than the last. The only downside on the smokability that I noticed was that the joint became a little too oily near the end of the sesh. This resulted in a little but of flavor loss at the end but still ended up being a solid smoke regardless of this. 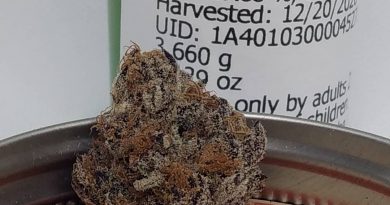 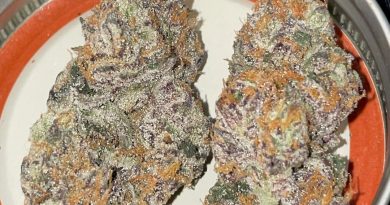 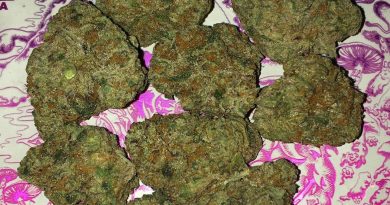