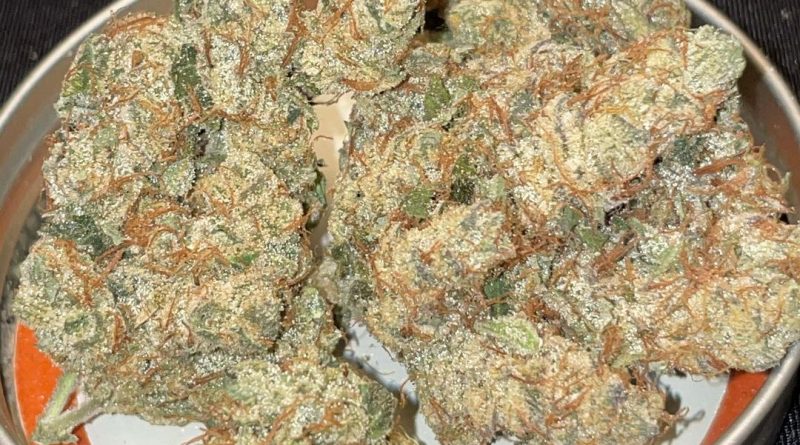 Hey what’s up everyone? Happy Hump Day as we’ve finally made it the mid-point of the week. It has been a couple months since I have reviewed anything from the Boutique catalog but today that will change. When I learned the Banana Bread, which was popped from a Strawnana bag seed by him a couple years back, was back in town I knew I had to grab some for review. I also thought this would be a good opportunity to see how it lined up to the Banana Bread I reviewed by Lonely Bones back in September. Personally, I am no stranger to this strain but I have never had the opportunity to try it directly from Boutique’s garden. If the cultivar is on point, Banana Bread typically will result in a flavorful smoke with powerful medicinal effects. Let’s waste no more time and get into the facts.

I received the Banana Bread in an thick, industrial black glass jar. This thing was sturdy and would easily injure someone if thrown at them. The Boutique labeling was displayed on top with two tape ends to seal the top of the jar. When I twisted off the childproof lid I received a scent that resembled spoiled strawberry milk. Those sweet and creamy berries were prevalent in the nose but had a subtle sour gas to it giving it an overall savory smell.

I believe this cultivar has potential to appeal to many different types of smokers. First off, given the savory flavor the Banana Bread had this will be an easy sell to those who enjoy any type of fruity, creamy or tasty cultivar in general. Secondly, this cultivar would almost certainly be enjoyed by those who enjoy balanced medicinal effects. My experience between a steady head and body high makes me believe this could be enjoyed by people with various illness throughout various times of the day. Even if you need a spirit boost in general, the relaxing effects from this cultivar will more than likely get you where you need to be. If you are one of those who prefers a longer lasting smoke and doesn’t really care about flavor this may be a miss for some. Besides that, I think that most smokers would enjoys most of the qualities this cultivar brings to the table.\

Once I put the joint out on the Banana Bread, the medicinal effects became noticeable about 10-15 minutes after. I started off with a light head buzz and a slowly rising euphoria that was lodged in my mid-section around the time I put out the joint. From there, the euphoric feel came up and over my shoulders leading to an enhanced feeling of relaxation as well as an increased heartbeat. I also felt a fairly cerebral head high from the effects that included a very mild racy feeling and slight paranoia. Personally, I felt like the soothing feel given off through this cultivars medicinal effects outweighed any other feature the high had to offer. What made the effects enjoyable for me is that it was a perfect combination between mind and body that didn’t wear me down at all; making it a suitable smoke for any part of the day or night. One thing that did miss the mark a bit was the duration. Even though the medicinal effects of this cultivar were potent when experienced, the high itself only last a little over an hour. I did have the urgency to roll up more after smoking this especially as the flavor of overripe bananas lingered after the sesh was over. All in all, the medicinal effects compliment the smoke well although I would’ve like to seen it last just a little bit longer than it did.\

When I pulled the nugs out they immediately stuck to my fingertips even though the looks of it was quite leafy and airy. The buds, which came with massive colas, were lighter green and almost a faded yellow with an incredible amount of pistils that stood up straight. Not to mention the numerous amount of trichromes that covered gave it a frosty coating. The yield upon breaking down this bud was a little deceiving giving the fluffy texture of it. Flakes of kief were in abundance falling from the grinder during this process. Ultimately, you had to pack the bud a little extra into it he joint when rolling up. The dry pull I received consisted of a sweet and sour berry flavor.

When I sparked the Banana Bread in an Organic RAW, a flare of overripe bananas was detected from the initial inhales. This was acquainted by a creamy berry that had a sourish-to-tart funk to it. On the way out, the terps I let out were a lot more sweet, musty, and woody. The taste of overripe bananas that was noticed on the inhale still lingered for a period after the smoke was let out. The pulls were certainly on the gassier side but not to the extent where I was coughing profusely or experiencing a build up of pressure in my chest. The Banana bread smoked as smooth as it was clean along with the fact that it did not run out of flavor. Even at the end, close to the filter, I was pulling in that overripe banana taste with sweet cream. I do have to say that the hits became a bit sharper closer to the halfway mark and from there on out. Due to the way this smoked throughout, I was surprised when I saw a think white ash with a heavy terp res ring surrounding the perimeter of the joint. The oil stains creeped their way down the joint enhancing the flavor more and more as the sesh went on. Overall, I was a lot more satisfied with this round of Banana Bread than the one I put up last September. This is mainly because this smoke was packed with flavor from start to finish as well as didn’t have a lot of lag time kicking in the medicinal effects. 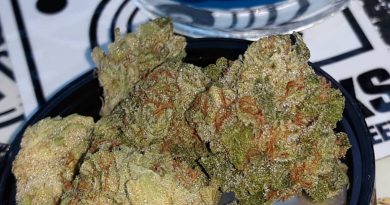 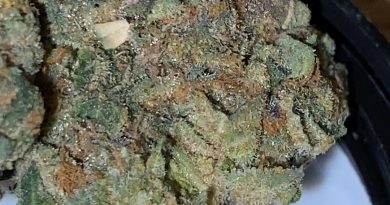 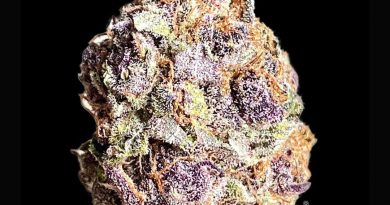