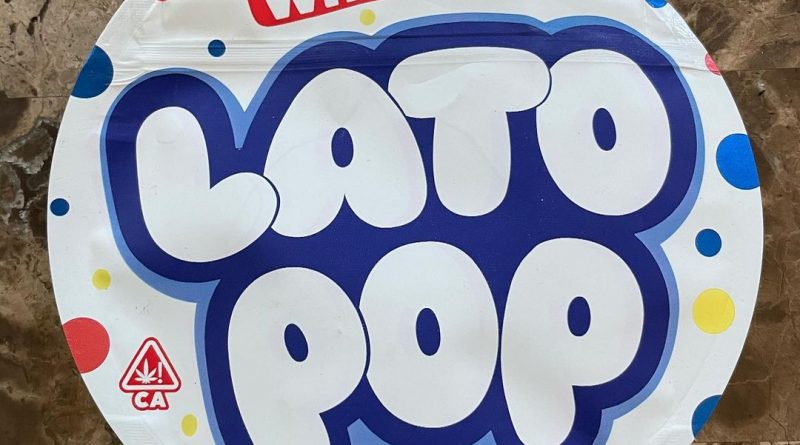 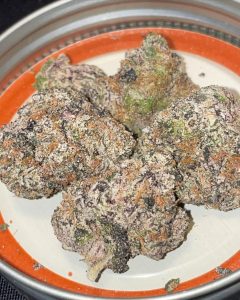 Hey what’s up everyone? It’s a new week and time for a new slate of reviews! Today, I will be diving into the second installment I have for the Lato Pop collaboration between High Tolerance and Joke’s Up. If you are looking for background info on the two I’d advise you to read the review I put up last Tuesday on the Lato Pop. This time around, I will be diving into the White Lato Pop which one would consider to be the brother/sister cultivar to Lato Pop. After some bright spots as well as some letdowns (especially the net weight), I was anxious to see how the White Lato Pop would line up in comparison. Receiving more of a fruitier smoke on the last one, I anticipated this would have a little more of an edge to it. Let’s waste no more time and get into the facts!

The packaging that the White Lato Pop was identical to the packaging on the original Lato Pop except for the fact it came in a white colorway with polka dots on it. When I opened the seal up, a creamy, fruity as well as nutty odor penetrated out of the bag. I also picked up on floral notes in there but this one also had a Runtz-like nose that was a lot gassier than the original. When I pulled the popcorn-size nugs, they felt quite dense consisting of a very similar (almost identical) appearance to the original Lato Pop. Made up of bright green hues along with darker purple leaves and a violet interior as well as considerable triche coverage, this cultivar was aesthetically pleasing to say the least. Once again, I was surprised by how in tact the pistils were considering the buds were exceptionally compressed due to storage.

First thing I checked for on the cultivar was the weight given my last experience and, sure enough, this also fell short weighing at 3.34g. Definitely was not what I was hoping (twice in a row) from a premier brand who prides themselves off “quality.” Nonetheless, breaking the buds open left a sticky, kiefy residue forcing my fingertips to glue to each other. I ended up receiving somewhat of an underwhelming breakup considering the density of the bud itself. It was a little less than anticipated, even with using the two-turn grinder method, I was still forced to use more than expected to fill up the joint. The dry pull was flavorful though, receiving a sweet, creamy bubblegum taste blended in with a floral zest.

When I sparked the White Lato Pop in an Organic RAW, the initial inhales were powered with a strong taste of floral and bubblegum. I was also pulling heavy creamy terps to match a significant amount of fruit, pine, and nuttiness gained on each inhale at the start. The flavors received during the exhale replicated those experienced on the inhale. The first thing that caught my attention, when releasing the smoke, was a sharp increase of fruity and nutty flavors left on the after taste. Another distinct feature I noticed about this smoke throughout the sesh was the consistent taste of bubblegum and pine. In my opinion, the taste on this cultivar had very similar attributes to the Bubblegum Haupia I put up a couple weeks back. There was really no denying the consistent flavor of candy this provided trough the entirety of the sesh pairing well with those creamier and more earth-like terps. The pulls were on the gassier side, at times, being a little too harsh. I personally didn’t think it was the cleanest I’ve ever had but, nevertheless, the White Lato Pop burned well feeding off a lighter gray ashes with some darker spots periodically. That’s is not to leave out the fact that the terp drip ring around the perimeter oozed with oil. All in all, I thought the smoke on this was pretty decent with the flavor being out of this world. I certainly felt as this was one of the strongest assets that the White Lato Pop had to offer.

Right around the time I was finishing up the joint, I felt a sudden swoop of calmness take over; leading me to drift in and out of my consciousness slightly. This really helped eased a lot of tension and anxiety during a particularly stressful week I had couple weeks back. About a half hour in, I was fully sedated between both my mind and body. I had a little bit of difficulty keeping up with my thought process while, at the same, feeling as if I was being given a full-body rubdown. I didn’t really do too much I can report on except for getting lost in a game on TV or podcast given a low level of energy received from the medicinal effects.

Due to this, I felt like this was more appropriate for weekend/night time use as compared to during the weekday. The duration of the high was much more on point for this cultivar as compared to the Lato Pop. I felt lost in the medicinal effects for around an hour an half to two hours on this one. I did feel a little bit sleepy on the comedown on this as well as being dragged out which I’m not the biggest fan of. Nonetheless, I believe that the White Lato Pop offered potent medicinal effects that served as the icing on the cake to a flavorful smoke.

After having a chance to try the White Lato Pop, this was easily the better of the two collaborations between High Tolerance and Jokes Up. I think the flavor alone will appeal to a large array of different smokers, especially those who favor more fruity/candy cultivars. In addition to that, there is no doubt in my mind that this cultivar will also have an appeal to those who reserve smoking towards later hours in the day given the indica-dominant medicinal effects experienced. However, I can’t really say that I can recommend this based on it being .2g short of an eighth of the second time. This is not to take away from any of the characteristics I mentioned in the review because this was an all-around solid cultivar. However, when you can find similar tasting profiles as well as medicinal effects elsewhere without the penny pinching. There’s not much I can do to justify that one blemish given the rate this is normally sold for. Nonetheless, I am glad that I finally had the chance to try the main Lato Pop cultivars and sure we will see HT in the mix again sometime down the road.

Strain Review: Otai by Joke’s Up